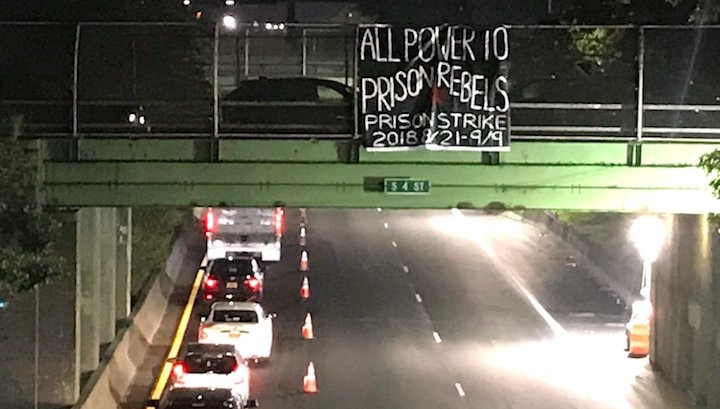 So the prisoner strike has been underway for more than 24 hours now. In the first day we got word of actions coming out from the prisons from Halifax, Nova Scotia, North Carolina, South Carolina, Georgia, Florida Northwest Detention Center in Tacoma, Washington and Folsom Prison in California reported strike action.

We saw outside solidarity actions in at least 21 cities around the US and as far abroad as Leipzig, Germany. We saw Palestinian political prisoners give a statement of solidarity from their prisons in occupied Palestine.

We called this conference call because those of us who have been coordinating media relations on the outside have been overwhelmed by the number of reporters and outlets who are covering the strike. Some of us who were involved with media relations in 2016 can say that the difference is dramatic and we thank you for your interest in this prisoner-led movement. Many of you have the same questions and so we want to give you all an opportunity to hear our responses in one place.

We want to note that although there aren't widespread reports of actions coming out of prisons that people need to understand that the tactics being used in this strike are not always visible. Prisoners are boycotting commissaries, they are engaging in hunger strikes which can take days for the state to acknowledge, and they will be engaging in sit-ins and work strikes which are not always reported to the outside. As we saw in 2016, Departments of Corrections are not reliable sources of information for these actions and will deny them and seek to repress those who are engaged in them.

We have spoken with family members who have suggested that cell phone lines may be being jammed at multiple prisons in South Carolina, New Mexico had a statewide lockdown yesterday. The departments of corrections in this country are working overtime to try and prevent strike action and to try and prevent word from getting out about actions that are taking place.

As you report the strike, we encourage you to uplift the actions that we do know about, but also acknowledge that strikers may be resisting in ways that are tougher to quantify and view. We encourage outlets to issue FOIA requests to prisons that we believe will show attempts to quell the strike and also evidence of boycotts and other strike activity.

We also really want to remind the media that this strike is about ten different demands. While prison slavery has become a galvanizing force in the public eye, and it is a key element that prisoners are protesting against, they have given you ten specific demands and it is important to talk about all of them or report on them individually. People need to understand how truth in sentencing laws function, how gang enhancement laws function, and how the prison litigation reform act works and why these are things that prisoners are targeting their protest around. We need to be talking about the lack of rehabilitation programs, mental health care, and the lack of education programs and how this undermines the ostensibly rehabilitative nature of the prison system itself.

Prisoners crafted these demands carefully through national organizing, based on the circumstances of the Lee Prison violence that occurred earlier this year, in an understanding of how the state brings about the conditions of violence like that, and the types of changes that are necessary to prevent that sort of violence from recurring. This is a human rights campaign and each of these demands should be understood through a human rights lens.