Inside Shakopee Prison last Saturday. Prisoners wore blue - the only color they can wear without getting in trouble - to protest in favor of changes demanded by LGBTQ prisoners 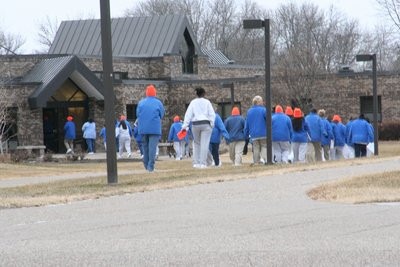 While Minneapolis was aglow with rainbows and the sounds of TLC a different type of Pride was happening inside Shakopee Prison last Saturday. Prisoners wore blue - the only color they can wear without getting in trouble - to protest in favor of changes demanded by LGBTQ prisoners.

“When I got up for breakfast, my unit all wore blue. I was very happy, very gay. At lunch people went to work out so not as much of a showing but at dinner they all had their blue shirts again” says Joe Vanderford, a trans-man pushed to the forefront by demanding the hormone treatment he qualifies for from the DOC.

A reported 100 prisoners out of the 130 in the Anthony Unit wore blue in support of the demands of LGBTQ prisoners and an end to a reported environment of discrimination and harassment. "Everybody deserves love, so why should you look at people different for who they love" says Melanie Quick, a prisoner at Shakopee who wore blue in solidarity with her trans and queer fellow prisoners.

Prisoners want hormones for trans prisoner Joe Vanderford; support groups and an LGBTQ advocate; end to mail censorship and the practice of denying or stopping medical treatment as punishment - including hormones; sensitivity training for prisoners and staff; a trans person on the committee that makes trans-treatment decisions; and an end to the controversial “no-touch policy” which some say is using homophobia to undermine the wellbeing of all prisoners at Shakopee, and for which LGBTQ prisoners feel is a means of harassment.

“I've known prejudice but the outright targeting of LGBTQ prisoners is crazy. I’ve been put in segregation for my ex-partner’s foot accidentally touching the tip of my shoe when she was stretching out her legs under the table” say Simone Stillday a prisoner and out lesbian at Shakopee.

In the free world, organizers from the Twin Cities Incarcerated Workers Organizing Committee (IWOC) circulated  petitions online and at Pride, gathering 500 signatures in support of the changes made.

Some IWOC organizers understand this issue personally. “In prison I asked for hormones and was sent to solitary confinement,” Diane Current, a trans-woman who spent 23 years behind bars says. “But I’m out now and not giving up on myself or all of us prisoners, trans, queer or otherwise.”

Her and others organizing may be working. Multiple prisoners report that Associate Warden Bosch has said the “no touch policy” will be ending this September, once he and Warden Beltz are gone. Commissioner Schnell told KSPT he wanted to be “responsive” and “at the forefront of this issue” - there has not however been any updates on Joe’s hormones, allowing LGBTQ groups, or changes on the other issues.

But Pride was special this year for LGBTQ prisoners and Joe Vanderford “All in all pretty amazing. I say this because typically you can't get a few of the women to agree on the color of the carpet. Maybe in a couple years I'll be out celebrating. Yes, I would wear a rainbow wig and elton john glasses”.

Fifty years after the stonewall riots LGBTQ prisoners hope they will have more to celebrate this summer. That will be decided by DOC officials - and how prisoners and community continue the fighting spirit of Pride.