All Eyes On Florida and Texas!: Heat Turned Up Around Juneteenth Call To Action

Alachua County, FL - The Gainesville chapter of the Incarcerated Workers Organizing Committee (IWOC) and the Campaign to Fight Toxic Prisons (FTP) have joined the call, initiated by prisoners in Florida and Texas, for actions demanding an end to mass incarceration and prison slavery around Juneteenth 2018, Tuesday, June 19.

Juneteenth is a celebration of the official end of chattel slavery in the United States. It marks the day when, two years after the Emancipation Proclamation, news of freedom reached slaves in Texas.

Prisoners in Texas and Florida, many of whom have been at the forefront of the massive, prisoner-led movement to bring about desperately needed changes in the U.S. prison system are calling on allied groups fighting for prison reform “on the outside” to organize community events and direct actions in solidarity with planned strikes and other actions by prisoners in facilities in both states and around the nation around Juneteenth.

In keeping with FDOC's repressive stance against calls for desperately-needed reforms, prison activists report word from prisoners that they have been told the state will go on lockdown in order to prevent protest activities in its facilities.

This news comes amidst rumors of a resignation by FDOC secretary Julie Jones, following on the heels of the federal Bureau of Prisons director resigning last month. There are also reports of prison staff planning walkouts in coordination with the strikes as the growing tension amidst the program and visitation cuts have some guards fearing an increase in violence against state employees.

Despite threats and intimidation, prisoners across the state have indicated plans to participate in a variety of actions on and around Juneteenth to highlight the horrific abuses and conditions that FDOC wishes to prevent coming to light.

IWOC and FTP will also hold solidarity actions at various locations around the state. Locations are not being announced in attempt to lessen retaliation against prisoners in certain facilities.

In addition, IWOC and FTP will join a community celebration hosted by Goddsville Dream Defenders, Florida Council for Incarcerated & Formerly Incarcerated Women and Girls, and other groups to celebrate Juneteenth in Downtown Gainesville, on Bo Diddley Plaza, Tuesday, June 19th from 6-8 p.m. This event will feature free food, inspirational and informative speakers, live music, and other performances.

The Juneteenth 2018 organizing highlights the current intensifying climate of struggle around issues of brutal conditions and forced, uncompensated or minimally-compensated labor (i.e. prison slavery) in Florida's prison system. It will also address ongoing repression against organizers affiliated (or alleged to be affiliated) with Operation PUSH, a growing movement of Florida prisoners which called for a work stoppage in January 2018 to protest the exploitation and abuse of incarcerated people. The specific demands of Operation Push include making slavery illegal once and for all, putting an end to the price gouging that targets prisoners and their families, reinstating parole and stopping the proposed visitation cuts that the state of Florida is attempting to impose.

In recent months, an atmosphere of censorship and repression has increased in Florida as the state Department of Corrections has labeled activity by advocacy groups on the outside and whistleblowers on the inside “gang activity.” Additionally, since Operation PUSH started FDOC has conducted lockdowns, major sweeps, transfers, investigations; has revoked the visitation privileges of people on the outside who are critical of the prison system; have brought charges against people on the inside with phony disciplinary reports in order to silence them in segregation and Close Management.

In the wake of multiple lawsuits costing the FDOC millions in payouts to victims of the abuse and neglect their officers have become known for, the state has decided to cut programs and contact visits. FDOC's new proposal of shifting away from live, in-person visits to video visits is seen by activists inside and outside prison walls as a direct retaliation against the kind of “inside/outside” activism that has led to the increased pressure and direct actions for change in recent years. The proposed video visits plan is seen as an effort to further separate, divide, and silence people, while also profiting off an already vulnerable population. Without in-person visits there will be no way to ever communicate with an incarcerated person again without being surveilled and censored.

IWOC, FTP, and other groups call on all people of conscience to join them in standing with prisoners and their families to force the state to change these outdated, egregious, and inhumane policies and conditions. Juneteenth will be one more step forward in an ongoing struggle that is growing, and whose organizers are determined to win, for the good of our families, our communities, and our society as a whole.

For more information about the prisoner resistance movement in Florida and beyond, follow these links: 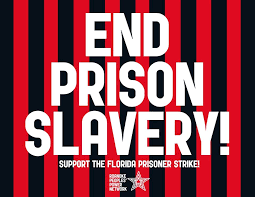