As organizers across the country step up preparations for the August 21st prison strike, prison officials and administrations will also be making plans for how to respond. Recent weeks have seen what appears to be a co-ordinated campaign of repression against prominent figures associated with the 2016 prison strike.

Kevin “Rashid” Johnson, a leader of the New Afrikan Black Panther Party (NABPP) and member of the Incarcerated Workers Organizing Committee (IWOC), whose organizing was discussed in DHS/FBI fusion center “terrorism threat assessment” publications as far back as 2009 (page 50) is being kept in solitary confinement after being given an “inciting a riot” charge for writing an article about the Operation PUSH strikes in Florida, and has faced punitive transfer after transfer.

Keith “Malik” Washington, a Texas inmate who is also involved with the NABPP and IWOC, has spent the past two years in ad-seg (solitary confinement) on a bogus riot charge connected to his involvement in the 2016 prison strike. He was due to be released from ad-seg, but then had his clearance abruptly revoked and was sent back to solitary on the grounds that the classifications committee had “received additional information” from the Fusion Center in Texas. He has also had issues with medical information about his health issues mysteriously disappearing, leading to the administration putting him in dangerous situations, and is currently being held in an extremely hot and humid punishment cell that he describes as being like “a living hell” and causing headaches, nosebleeds and dizziness. A full update on Malik's condition is attached below.

Meanwhile, Jason Renard Walker, another Texas inmate involved with the NABPP and the 2016 strikes, and a contributor to the Fire Inside zine, has managed to get released from solitary, but faces constant threats and harassment from staff, including threats to send him back to solitary on bogus charges for things as simple as asking for water and medical attention, and trying to get back into his own cell so he can use a fan to cool down. Both Malik and Jason have reported having their mail tampered with, and the explicitly political nature of this censorship was made clear in a conversation with a prison official who told Jason that any writing containing the words “black panther” would be treated as gang material.

Supporting the prison strike means monitoring and opposing the repressive methods that the prison system uses to try and break it, and paying attention to the treatment of 2016 strike organizers like Rashid, Malik, Jason and others can indicate the tactics that are likely to be used more widely in the weeks to come.

What we can do:

Malik has specifically requested a call-in campaign urging Texas legislators to investigate the conditions at the McConnell Unit. Below are some details of Texas legislators and TDCJ officials, along with a suggested script you can use:

Miguel Martinez, Regional Director with responsibility for the McConnell Unit – (361) 362-6328

“Hello, my name is ----, and I am contacting you about conditions in the prisons run by the Texas Department of Criminal Justice.

I demand that the dangerous conditions of extreme heat and humidity that are widespread in units such as the McConnell and Telford Units are fully investigated and rectified immediately. I further request that immediate heat relief measures are put in place, as this is especially urgent for prisoners with health issues.

The prison administration needs to stop the retaliation and harassment of whistleblowers such as Keith Washington (TDCJ 1487958) and Jason Walker (TDCJ 1532092). This retaliation includes, but is not limited to, unjustified use of solitary confinement as a punishment for constitutionally protected speech, denial of parole applications, and direct threats of harm. Please be aware that the State of Texas and the TDCJ may be held legally responsible for any harm suffered by these or any other inmates as a result of the administration's negligence or punitive actions.

The practice of giving guards quotas of disciplinary reports to meet must also be stopped at once, as this leads to the generation of false or trivial reports as a way of meeting quotas.

In closing, I also wish to state my support for the demands of the ongoing prison strike movement.

Malik has stated that he urgently needs professional legal help in challenging the various forms of harassment he has been subjected to, particularly the interference with his mail. If you know of any sympathetic lawyers or other legal-minded folk who might be able to help, please contact them and ask if they could take the case on.

He has also asked for help covering costs – specifically, $100 for medical co-pay, $550 for legal fees related to his ongoing cases, and another $100 for stamps and stationery to help him connected to the outside world. A fundraiser to cover these costs should hopefully be coming soon, but in the meantime you can send him some cash via jpay.com, or if you don't have a jpay account donations can be sent via paypal to atxanarchistblackcross (at) gmail (dot) com with a note saying "for Malik", or get in touch with them for other payment options.

Every letter they receive lifts their spirit and protects them, because it lets prison officials know they have people around them, watching for what happens to them. It should also be possible to contact them via jpay.com if you prefer.

Below is the most recent update from Malik:

You have my express permission to reprint or post this health update far and wide, anywhere you choose.

I know that many of you have been very concerned about my health and the conditions inside this gulag at the McConnell Unit. Please allow me to provide you with a very thorough update.

I saw a physician's assistant named Ms. Corbett, a very professional and competent humyn being. Ms. Corbett admitted that there was a lapse in communication between Darrington Unit, where I had a seizure on June 24th 2018, and McConnell. Without your phone calls and emails, I may never have been seen! Joan, Annabelle, Heinz and I saw these same shenanigans when Jeffrey Thomas was here. Jeffrey, along with his hernia problem, had some psychological issues, so these oppressors exploited those to abuse him! I'm not Jeffrey!

Ms. Corbett increased my dosage of Dilantin to 400mg per day, and added another anti-seizure medication. She also ordered some lab tests. My liver enzymes were high in April 2018. We are making sure I don't have Hepatitis-C. I don't think I have Hep-C.

Ms. Corbett restored my heat restrictions! She wondered why they had been discontinued? A lot of weird stuff has been happening lately. Listen comrades, TDCJ and UTMB conspired on all this “mess”. None of this was an “accident”, it was well thought out and planned by Bryan Collier, Lorie Davis and the Department of Homeland Security!

I have exhibited symptoms that I may have had a minor stroke. I've been scheduled to see a neurologist soon. I'm experiencing some weakness on the left side of my body. Of course, this is what TDCJ was hoping for, and why I've been pleading for legal help. The Senior Warden, Philip Sifuentes, actually has cooler cells to move me into, but he refuses to do so! I may be moved to a 1-Row cell on this section, but I can tell you that the HVAC system is broken on this section.

Warden Sifuentes is a professional liar. In order to expose him, we must demand that the Texas Legislature allow a non-biased independent third party to test the air temperature and humidity inside the cells between 6pm and 9pm. Specifically, we must focus on F-Pod (F Section) cells F-71 through F-74 on 12 building. Even if they move me, I will not abandon this fight. These conditions are the worst I've ever experienced as far as extreme heat go!

What is happening here is by design – allow me to explain. Senior Warden Philip Sifuentes is telling the public that the “ambient” temperature here in ad-seg at McConnell is maintained at 74 degrees Fahrenheit. Not so on F-Pod! Hell no! Sifuentes is also saying we have a Tempered Air System – all of this is well rehearsed. He knows he is misinforming the media and the public at large. Not many prisoners can articulate the true conditions we face in these cement slab death traps!

F-Pod (F-Section) cells F-71 through F-84 is where McConnell houses the “worst of the worst”! The most violent, assaultive, and dangerous prisoners are housed right here with me! F-Pod is a punitive housing area.

The air-holes in our front doors are covered with plexi-glass, the HVAC system has been shut down down to a barely operable level! What this has done is create an extremely hot and humid environment. I've been experiencing headaches, nosebleeds, and dizzyness! And most of us here are black men! Coincidence? Hell no!

My back wall faces the setting sun. Between 5pm and 5am, life is a living hell here! I stand before you today to say that I am a prison abolitionist – I'm also a humyn being, and I need your help!

In solidarity and love, 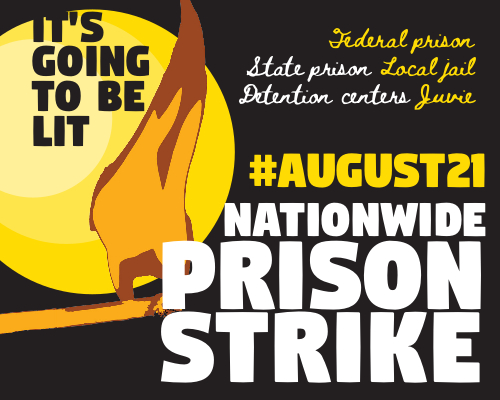