“The U.S. carceral network kills, however, and in its prisons, it kills more blacks than any other ethnic group. American prisons constitute an “outside” in U.S. political life... Foucault remains mute about the incarcerated person's vulnerability to police beatings, rape, shock treatment and death row. Penal incarceration and executions are the state's procedures for discarding the unassimilable in an external inferno of non-existence. Not everything, nor everyone, is saved.” - Joy James, Resisting State Violence, cited in Jackie Wang, Carceral Capitalism, pg. 279 (semiotext(e) 2018)

As you can clearly see, Black Feminist scholar Joy James sets the tone for this dynamic and provocative article. I highly recommend all of you check out scholar and activist Jackie Wang's new book, Carceral Capitalism. It may change your life as well as your perspectives on freedom, justice and equality in Amerika. Sister Jackie really 'did her thang' and now I'm about to do mine!

First and foremost I send out a clenched fist salute to all of the wimmin and men incarcerated across the United States who stood up on August 21st and who continue to do so! Without your sacrifice, there will be no change.

Comrades, the Texas Department of Criminal Justice, in consort with DHS, FBI, JTTF, and the Central Texas Fusion Center has drawn a line in the sand, and their intentions are clear. These oppressors and enemies of freedom are waging an aggressive war and assault against any individual or organization which has defined themselves as anti-imperialists and/or prison abolitionists.

This illegal and unconstitutional 'program' is not just being implemented and initiated in Texas. This is a nationwide program enacted by the U.S. Department of Justice! Ol' racist Jeff Sessions at it again!

I was specifically targeted because I am considered as being an influential 'leader' and spokespersyn for the 'new' prison movement. My membership in the IWW and the Incarcerated Workers Organizing Committe (IWOC) has also made me and many others 'persons of interest'.

This information was revealed to me by a TDCJ employee who eavesdropped on a meeting held at the W.G. McConnell Unit about me and my presence on the unit. I've been asked to conceal their identity. I will respect that request.

The tactics the oppressor is using are not 'fair', not are they following any set rules or policies.

The standing order is clear: “Do whatever is necessary to isolate, disrupt, silence, or even harm these abolitionists!”

Our steadfast soldier in struggle Comrade “Rashid” Johnson gets placed on an empty 22-man Behavior Modification and Sensory Deprivation Wing at Red Onion in June 2018 and no-one can see something horribly wrong with that? Now my friend and comrade is being housed on Virginia's Death Row at Sussex I? It's time Alicia Garza and Patrisse Khan Cullors lend some aid to this movement! Now!

The rap trio “the Migos” have a verse in one of their songs which says, “they don't think I see the plot” - but I do see it! Live and in living color. And Cardi B, if you really love Offset (and I know you do), you better wake him up quick, because the hip-hop pigs are focusing in on your man!

In regards to influential leaders being targeted by the feds, we have seen the pigs pull this stunt before! In fact, in 2016, during the run-up to the historic national prison work strike, the Ohio DOC and FBI targeted my Muslim brother and comrade in struggle, Imam Siddique Abdullah Hasan.

An article written online about the incident said, “Imam Hasan was falsely accused of inciting terrorism prior to the September 9th national prison work strikes. At the time, Imam Hasan believed the false report was written as a pretext to restrict his phone and email privileges for thirty days so he could not communicate to media and supporters about the strike.” He was right on point!

Now, let's analyze some things which have happened prior to August 21st 2018.

In Texas, on June 21st 2018, I arrived at Ramsey I Unit in Rosharon, Texas, to participate in the Ad-Seg Transition Program. The very next day on June 22nd, 2018 at 4.30am, I'm shacked, handcuffed, and spirited away to an ad-seg unit where I have an epileptic seizure, left in my cell and ignored! I'm sorry folks, this ain't just TDCJ in on this, I smelled the feds right from Jump Street!

While I'm going through my ordeal, simultaneously in Virginia, a pig at Red Onion ransacks Comrade Rashid's property, then plants a home-made cuff key and writes a fabricated disciplinary report!

Then in Texas, on June 27th 2018, at McConnell Unit, Security Threat Group Sergeant Joe Miereles writes me a major case for writing the words “on August 21st we rise.” I get immediately placed on a Level 3 punitive torture wing. Imagine that!?

Now let's backtrack a bit so I can expose all the important details. After being subjected to blatant acts of prejudice, bigotry, and discrimination at the hands of Captain Norma Smith and Senior Warden Jeffrey Richardson at Ramsey I Unit, I was maliciously transferred to the McConnell Ad-Seg Unit located in Beeville, Texas. I arrived at McConnell around 11:30am on June 25th, 2018.

I was shackled with leg irons and handcuffs with a “special” black box which was placed on my handcuffs in such a way as to restrict my movement. (It hurts!)

The pigs had another chain which connected both my feet and hand restraints together! Yes comrades – this is Amerikkka!

I was brought into an office full of high-ranking McConnell Unit prison officials. The speaker for the assembled group of pigs was the Senior Warden: Mr Philip Sifuentes. The HPIC (Head Pig In Charge)!

Sifuentes explained how he had received a “special email” from his boss – TDCJ Region IV Director Miguel Martinez. Sifuentes said he was instructed to house me in Ad-Seg and to watch me closely.

When I asked him why was this being done, Sifuentes said that he did not know, but then he launched into a diatribe, describing himself as a “company man” and how he felt it was his job to correct me with discipline because I lacked an authority figure in my life.

Of course, he never met my father! Harry Berkeley Washington – a strong Black man! Allow me to share some words from the so-called “company man”.

“Mr Washington, I am a “company man”, and I'm going to do exactly what the people who sign my checks tell me to do! Now, as long as you keep quiet and do not try to influence anybody down here, we'll be alright – but I want you to know that even if you engage in or organize a peaceful protest, our response will be with violence.”

And with those comments, the “company man” tipped his hand. I now knew exactly what this was all about, the upcoming national prison work strike set to start August 21st 2018!

TDCJ, Alabama DOC, Florida DOC, South and North Carolina DOC, Ohio DOC, Virginia DOC, Louisiana, Georgia, Mississippi, California, New York and all points in between – these pigs who operate these slave kamps and gulags in Amerika and the UK don't ever want to see prisoners organizing themselves into a union of workers! Workers have rights!

Our union reps can demand our rights be respected or we will strike! That's why I say join the IWOC and IWW today! Feel me?

A slave can never be a worker until she or he sheds the “slave mentality”.

I do have a specific message for all Fellow Workers (IWW members).

Since 1905, the wobblies have waged a protracted struggle to win labor rights not just for the workers, but for the organizers who educate and rally the workers!

Now I'm down here in this torture kamp in South Texas – these people had no legal grounds to do this to me!

Don't ignore me now – now that shit done got real! I've been forced into one of the most punitive and inhumane environments I've ever set foot in, and all this was orchestrated by the U.S. Federal Government.

Kinetik Justice already made the call for a National Response Team in order to help those who fall victim to fascist retaliation tactics! Can y'all hear me now?

Dare to struggle, dare to win, all power to the people, 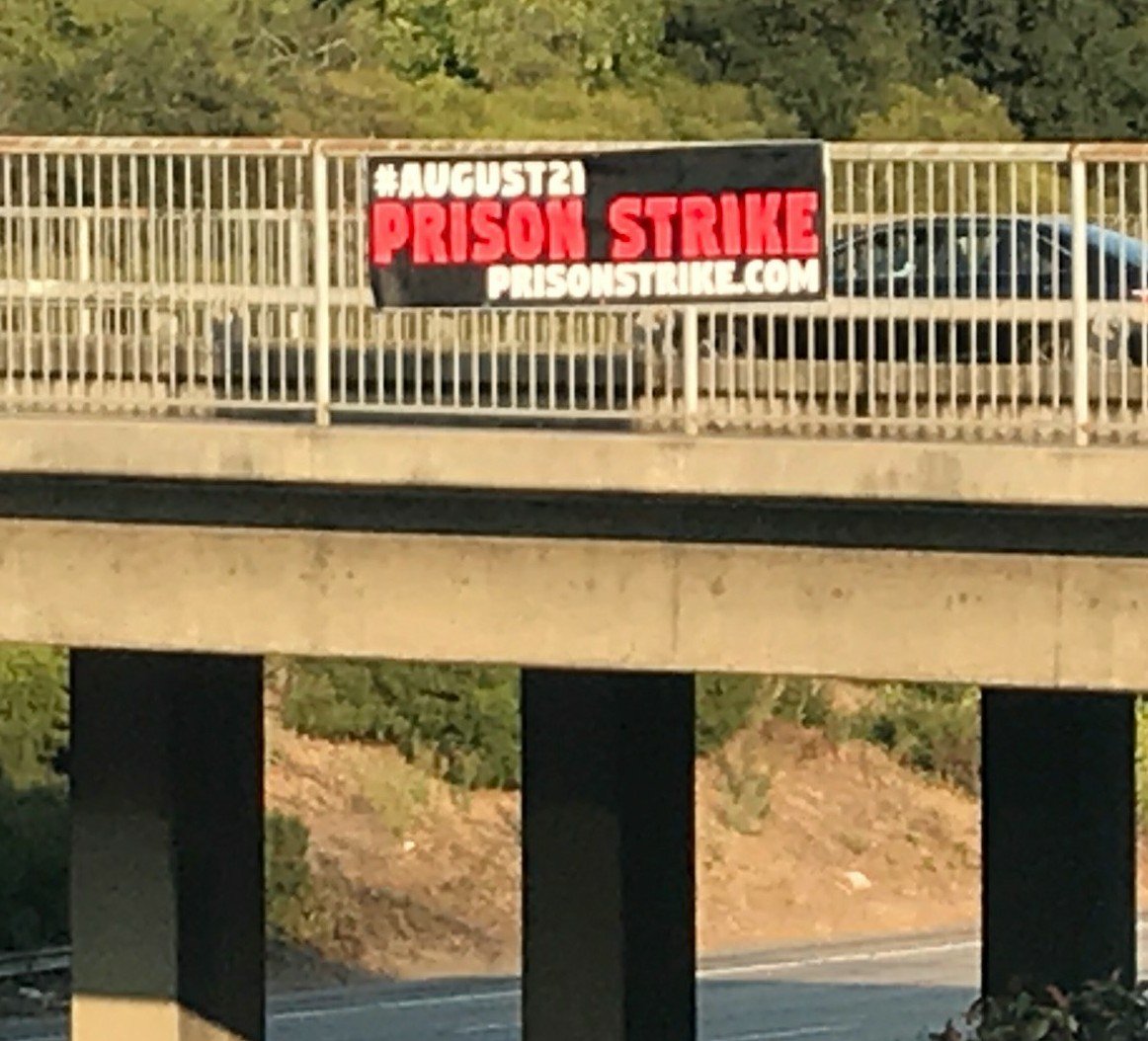