"Any kind of act that's designed to delay or deprive you and me, right now, of getting full rights, that's the government that's responsible. And any time you find the government involved in a conspiracy to violate the citizenship or civil rights of a people in 1964 [or 2018!--Malik] then you are wasting your time going to that government expecting redress. Instead you have to take that government to the World Court and accuse it of genocide and all of the other crimes that it is guilty of today." --Malcolm X, excerpt from "The Ballot or the Bullet," King Solomon Baptist Church, Detroit Michigan, April 12, 1964

I don't need to be long-winded to actually describe to you what is happening and what I would like some of y'all to do inorder to aid me to overcome this.

I should be headed to general population, but the Central Texas Fusion Center which works in concert with the FBI and the DHS decided to label me a National Security Threat!! So they got slick. Made it "look like" I was getting out of Ad-Seg. Even went as far as transferring me Ramsey I Unit in Rosharon, Texas. They took all the shackles and chains off, let me walk to chow, get some hugs and some 'dap' from brothers who know me and love me, and then the next morning at 4:30 AM, they came and got me!!

I was re-shackled and re-chained, and then I was sent to the worst Ad-Seg unit I have ever been to -- McConnell Unit Administrative Segregation located in Beeville, Texas! Now the game done got dirty, y'all -- I need some legal help, 'cause this ain't right!

The oppressors have been treating me like I am Osama bin Laden! For some reason, I can only be pulled out of my cell with a video camera on me. So the officers here use that as a reason to deny me showers and recreation! The in-cell temperatures here reach 110˚F! But it's just this specific section -- allow me to elaborate.

I've been placed in an Ad-Seg cell on 2-Row on F-Pod, F-Section. My cell is F-82. It is covered with black soot from a previous fire. The ventilation (HVAC system) is "broken", so they say. One officer however said, "They had it shut off when they brought you here, Malik." Yeah, just about everybody here, even the pigs, know me as Malik or Comrade Malik.

This entire section is exposed to deadly heat extremes -- right now! On 1 Row, we have seven cells F-71 through F-77; on 2-Row, it's F-78 through F-84. There is absolutely no ventilation inside these cells. There are tiny holes in our cell doors; they are covered with Plexi-Glass! No oxygen, folks! Just a small crevice at the bottom of the door -- it is a formula for disaster.

These cells are made of concrete slabs, which absorb extreme heat during the day and then release it at night!! The senior warden here is Philip Sifuentes and the Assistant Warden over Ad-Seg is G. Miller. They know all about the inhuman conditions inside these cells, but when I try to discuss the problem with them, they say something slick like, "Tell the taxpayers; I don't give a damn, I work with what they give me!" Pretty professional, huh?

The Texas Dept. of Criminal Justice has a multi-billion dollar budget. They have over 110 prison facilities. They don't have to force human beings to live like this, but they do it! What is very unsettling to me in this particular section F-Pod (F-Section), the living conditions are horrible.

I've noticed that a disproportionate number of the prisoners in this section are Black males!! There are appearances of a type of unwritten racial profiling program which targets Blacks specifically for placement in the Hot Box -- the racist oppressors did this in South during slavery!

Something illegal, unethical, and unjust is happening right here in the McConnell Unit. And what is happening is being promoted, condoned, and sanctioned by the Federal government! That's right, the Feds!!

Listen to these names: Abe Martinez (US Attorney for the Southern District of Texas). Miguel Martinez (TDCJ Region IV Director). Phillip Sifuentes (Senior Warden, McConnell Unit). These 'sound like' names of individuals who should be comrades in the struggle! But like so many Brown and Black people, they have sold their soul for a jelly roll, and do the bidding of the fascist imperialist oppressors! In fact, sisters and brothers, they ARE the oppressor!!

For sure, racism in Amerika is alive and well, but there is something more sinister going on. Sean Swain is a white male prisoner in Ohio who has a big ol' beard like me; he served in the US Army just like me; he is a member of the IWW like me and he is an abolitionist just like me! Even though he's a white man and I am Black! And like me, the US government has conspired with the Ohio Department of Corrections to place Sean in a position where perhaps death seems to be the only option. I say to Sean Swain -- Stay strong, comrade! Help is on the way! We will expose this Federal repression program together!

What I really need down here in Texas is media exposure, legal aid, and I really need y'all to contact state and federal legislators! Remember, the best antiseptic for injustice is sunlight!

Dare to Struggle -- dare to win!

All Power to the People!

Malik is a leader of the New Afrikan Black Panther Party (Prison Chapter) and of the movement to Abolish the 13th Amendment, which legalizes slavery in prisons. 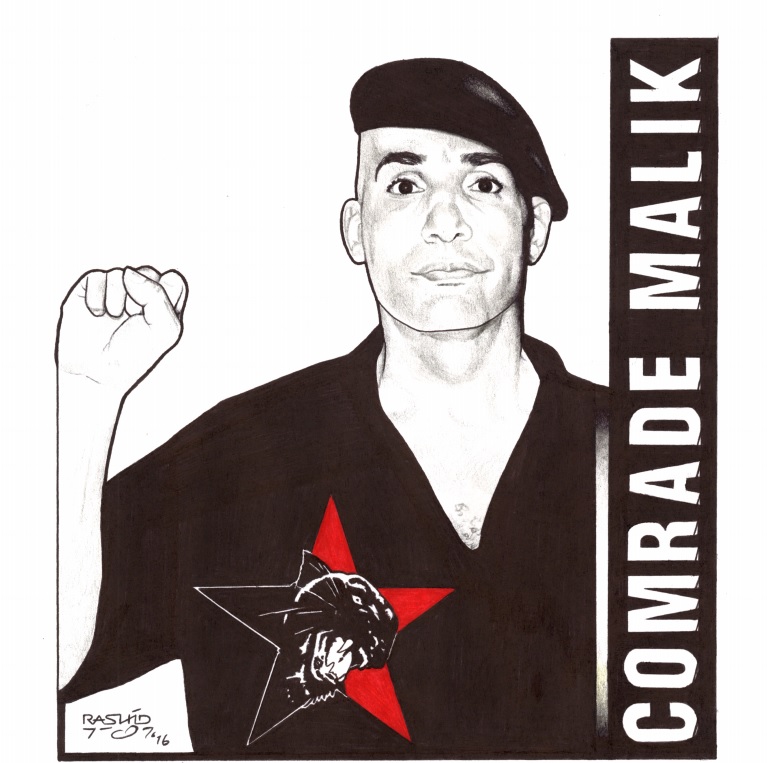