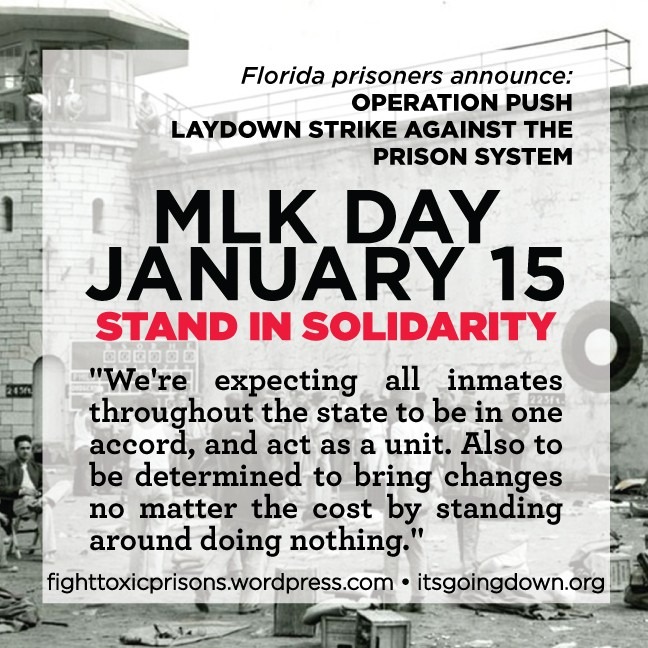 For up to date information, visit our Operation PUSH campaign page.

Interview by Its Going Down

This January prisoners in Florida will continue to build on the momentum of nearly two years of uprising and rebellion, launching a statewide strike on January 15th. We had the opportunity to speak with one of the organizers from within a Florida facility. The interview is brief but powerful.

Bloc Party: Start by telling us a little about the network of people organizing this protest without giving up anonymity, to help us understand who you are and what experiences you had that lead you here?

Florida Prison Organizer: Operation PUSH, is the network of people organizing this protest. We are a newly founded group who set out to educate all inmates within the FDOC. Most of us inmates, if not all, are aware that we’re being taken advantage of, but some of us don’t know the extent. You’ll do us no injustice if you address us as veterans who has been in the system for quite awhile and has experienced all hardships unimaginable.

Bloc Party: The call out for the upcoming protest on January 15th, calls for prisoners to lay down on MLK day this year. What do you mean by that? What does the protest entail?

Florida Prison Organizer: It means to willfully give up our privileges, like making phone calls, buying canteen, visits, and not attain to work assignments.

Bloc Party: We have heard that you are coordinating this protest among prisoners at eight prisons in the Florida prison system. What kind of participation are you expecting?

Florida Prison Organizer: We’re expecting all inmates throughout the state to be in one accord, and act as a unit. Also to be determined to bring changes no matter the cost by standing around doing nothing.

Bloc Party: Earlier this year, we saw uprisings across Florida prisons that resulted in the whole corrections system being put on lock down on Sept 2016. During the national prison strike, prisoners at several Florida facilities participated with media reporting that hundreds at the Holmes facility caused infrastructural damage to almost every dorm in the facility. How has the repression that has followed these uprisings impacted your current planning and tactics?

Florida Prison Organizer: Violence and destructions is not the answer so we’re taking a different approach. Our intentions are to have a peaceful demonstration and simply refuse to work, and buy canteen, visitation, and phones. Use our economical power. These “privileges” are a facade which help them more than it does inmates by boosting their revenues. Boycotting them may temporarily seem like creating burdens for ourselves, but that sacrifice now is worth having a better tomorrow. Or future.

Bloc Party: In the call out for the strike, you say, “If we show them violence they will have a legitimate excuse to use brute force against us and explain to the public that they had to use brute force in order to contain the situations. However, their weakness is their pocket.” Will you elaborate on this tactical decision?

Florida Prison Organizer: In the past violence and destruction has not achieved the desired results. It has only afforded the authorities an excuse to use brute force and portray a negative picture of the inmate population making us appear to be uneducated, violent, and our issues frivolous redirecting the focus of the demonstrations to their advantage. Our power lies in economics, if we Boycott work and give up our so called privileges, it will have a negative impact on the revenue inmates generate through Labor and excessive fees and force change.

Bloc Party: You call for “all organized groups as well as religious systems to come together on the same page.” Are you having any success in convincing prisoners to set aside their racial differences, religious differences or affiliation differences? How divided is the prison population there and what are you doing to build unity?

Florida Prison Organizer: Absolutely! We’ve seen tremendous success on bringing everyone together. Actually, it was easy to convince those organize groups, because anyone who is affiliated has rules to abide by, convince their leaders and the rest will follow. That’s why we spend most of our time educating others , help them see pass their own blindness. After all, the inmates population within the FDOC are not divided as they portrait them to be, all of us knows that we’re all we got, it’s always us against them

Bloc Party: What can people on the outside do to help you with the protest?

Florida Prison Organizer: Help us reach other prisoners with this plan, because it’ll take all of us as a whole to create this platform so our voice can be heard.

Bloc Party: What else do you want us to know?

Florida Prison Organizer: Basically we are open to helpful suggestions and are very appreciative of all support.