A Labor Day Call to Action

The End of Prison Slavery, the Rebirth of Working Class Resistance 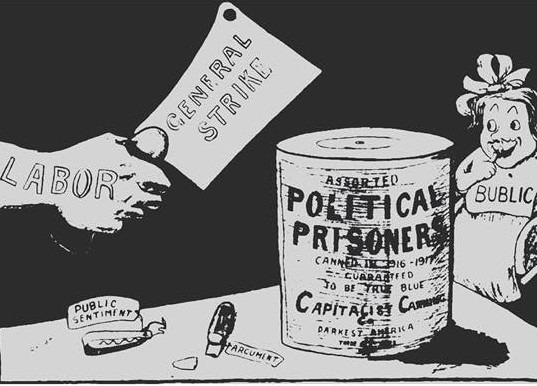 Are you pissed off about the recent attacks against public employee unions? Are you disturbed by the continuation of literal slavery in the prison system?

This Labor Day weekend take it to the barricades!

This is a call to establish encampments and coordinate direct actions surrounding the Labor Day weekend at the site of prison labor camps. Inspired by the recent wave of #AbolishICE organizing, prison abolitionists and labor activists have joined forces to call for an escalation of the movement to defend public service unions, stop prison slave labor, and end mass incarceration.

As prisoners launch what is anticipated to be the largest national prison strike in U.S. history, between August 21- September 9, we on the outside must also ask ourselves, what are we willing to do and how much are we willing to risk to demonstrate our solidarity to fellow workers?

Earlier this year, the Supreme Court announced one of the most devastating blows to union membership in decades. The Janus decision specifically targeted public employees of state and local agencies, in which the Court decreed that public workers who benefit from their unions' collective-bargaining efforts owe no obligation to offer financial support for those efforts. This ruling opens the door for corporate interests to decimate this organizing force of nearly 7 million members that has consistently stood up against privatization, including in the prison industry.

All hope is not lost and those whose dedication to working-class power is unhindered by right wing attacks know that this is a time to step up, not back. It's a time to fight harder and smarter.

So let's cut to the chase. It's no secret that police and prisons usurp a majority of funds available to the general budgets of state and local governments. It is not uncommon to have a quarter to half of any given city or county budget be dumped into police or sheriff coffers. As of 2017, the best attempts to assess total costs of prison and policing land around $182 billion a year. According to reports, all this spending does little towards achieving actual public safety.

This spending behavior has created  a police state and a national prison population that exceeds the entire population of major cities like Philadelphia and Dallas, as well as that of at least 14 US states. It has become a nation unto itself, comprised of exiles deprived of basic constitutional and human rights under the guise of empty words like “corrections.” For example, six million Americans have been denied access to the ballot based on a criminal conviction, not to mention their limited access to Due Process, Free Speech and other basic rights. These are all issues raised in the 10 primary demands of striking prisoners, initially presented by the organization Jailhouse Lawyers Speak.

The conditions prisoners face are constantly being exposed for abuse, exploitation, racism and brutal violence. Prisoners are not our enemies. They are neighbors, friends and family members. They are people who may have once worked in our communities, but due to a variety of circumstances including racism, poverty and mental illness, and domestic abuse, they are now locked in overcrowded human warehouses.

Thanks to the popularity of books like Michelle Alexander’s The New Jim Crow and films like Ava DuVernay’s 13th, the disproportionate representation of Black communities in prison is no longer a secret or fringe issue. What may be lesser known is that free Black workers remain more likely to be union members than any other demographic. While it’s widely accepted that the prison population rose 700% since 1970 in a direct retaliation against the civil rights and Black power movements, a similar case can be made for the labor movement: today’s criminal justice policies serve the purpose of quelling progressive social movements today, just as they did following the U.S. Civil War 150 years ago.

We believe that an end to the police state and the mass incarceration it fuels could usher in an era of renewed public sector solidarity. Although prisons warehouse people of all types, the most common denominator for those inside is grinding poverty from inner city and rural communities that are nearly devoid of access to opportunities for social and cultural survival. The billions of dollars that get dumped into police and prison budgets annually could instead go towards effective rehabilitation and solid employment for the current prison population of over 2 million potential union members.

Right now many union organizations are gearing up for picnics next week, others are organizing around raising the minimum wage. But for those reading this call to action, we invite you to take a step further and join the front lines of a long overdue working class resistance movement.

Our brothers and sisters locked in cages are paid pennies on the hour if anything at all. In the Southern states Jim Crow prevails as many prisons systems still pay nothing. In state prison systems across the South, access to rehabilitative programs, an unbiased parole board or fair pricing at commissary is rare, not to mention that KKK members are still found in the guards’ ranks.

To offer a single example, the state of Florida's Department of Transportation paid the state’s Department of Corrections 19 million dollars last year in a contract for prison labor. Little has changed since one hundred years ago when many of that state’s first roads were built by convict-leased former slaves.

In places where prisoners do get paid a nominal amount, it’s actually going down. As of last year, the average of the minimum daily wages paid to incarcerated workers for non-industry prison jobs is now 86 cents, down from 93 cents reported in 2001. The average maximum daily wage for the same prison jobs has declined more significantly, from $4.73 in 2001 to $3.45 today.

But prisoners don't just maintain the roads and toil in license plate factories. They actually run the entire prison system too. They cook, they clean, they paint, they weld, they repair cars, they do plumbing and maintain waste treatment facilities, they staff law libraries. All while prison guards generally stand and watch.

While it is encouraging to see some unions pushing back against prison privatization, it is a push that needs to be redirected against the prison system as a whole. Prison guards are modern day slave overseers whether the prison is private or public. No one grows up wanting to be in that role, and studies have concluded that those who are entrenched in it bring that violence back into their own households and communities.

To be clear, when we speak of ending mass incarceration and abolition of prison slavery, we call for the immediate redistribution of the billions spent in policing and prisons into good jobs and social programs that address the roots of our social problems including racism, substance abuse, domestic violence, poverty and mental illness. These are social issues that will never be resolved by policies like the “war on drugs” or criminalizing immigration.

Come this Labor Day, for those who hear the call, we suggest blockades of prison labor facilities, encampments at their gates, and steadfast resolve to end slavery once and for all.