“...We're reaching a point where capitalism's rapaciousness threatens the collapse of entire ecosystems and has us catapulting toward irreversible climate change catastrophe.” - Political prisoner David Gilbert, from an interview with Bob Feldman

Right now, many of you are obtaining a clearer perspective of what actually is going on inside Texas prisons: deadly extreme heat, toxic water, and the “mysterious” deaths of prisoners at the Bill Clements Unit have recently been exposed by journalists who are not imprisoned. I am very glad to see this.

More than ever, now is the time for “the chickens to come home and roost” for the actions perpetrated by the ultra-corrupt prison officials of the Texas Department of Criminal Justice (TDCJ). Like Brother Malcolm X, I say “chickens coming home to roost never made me sad, they only made me glad.”

I say once again, because TDCJ has done this before. Candice Bernd of Truth-Out just recently reported on the problem in her article “Cruel and Unusual: Texas Prisoners Face Deadly Heat and Contaminated Water.” I highly recommend you read Ms Bernd's article and follow the series she is working on with her colleagues from Earth Island Journal, Maureen Nandini Mitra and Zoe Loftus-Farren, “America's Toxic Prisons: The Environmental Injustices of Mass Incarceration”.

I met Candice Bernd in July 2017 right here in the Eastham Unit. I was impressed by her intelligence and also by her commitment to unearthing the truth and reporting it. Like me, Candice is not just a journalist, she is an activist.

In 2015, I began raising the alarm about arsenic contaminated water at the Wallace Pack Unit (Pack I) located in Navasota, Texas. Panagioti Tsolkas, the co-founder of the Prison Ecology Project, raised the alarm also. In November 2015, I asked Professor Victor Wallis PhD of Berklee College (School of Music) in Boston, MA, to submit a complaint to the the TDCJ Ombudsman Office concerning the arsenic-tainted water at Pack I Unit. In the response we received, everybody lied! TDCJ lied, the Texas Commission on Environmental Justice lied, Emma Guerra the Ombudspersyn lied too!

A lot of people don't realize that I am a communist and I subscribe to a very strict process when I am confronted with a problem. I apply historical dialectical materialism. I perform a concrete analysis of the conditions around me.

So I decided to provide for you the actual response we received from the TDCJ Ombudsman when we complained about arsenic contamination at the Pack I Unit in November 2015. 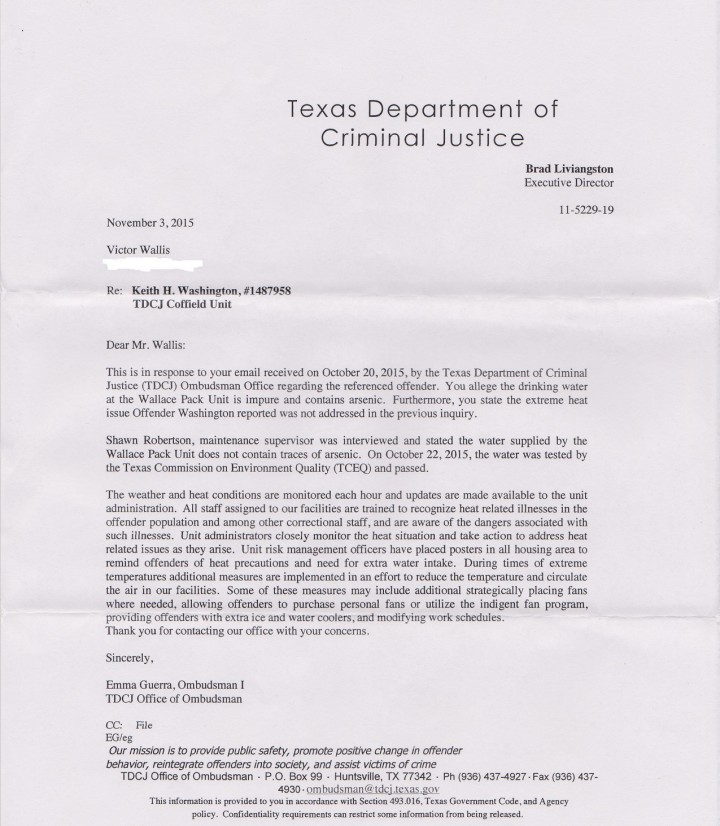 In June 2016, Federal Judge Keith P Ellison ordered TDCJ to provide arsenic-free water to prisoners at Pack I because a finding of fact proved that Pack I's water supply contained 2.5-4 times the EPA approved level of arsenic. So we learned a valuable lesson from that experience.

The State of Texas and its Prison Agency will lie about serious violations of humyn rights – FACT!

Through my research here on the Eastham Unit located in Lovelady, Texas, I have discovered that there has been a high frequency of lead and free copper found in the water system which serves Eastham Unit. Free copper and lead reveal a problem with the lines and service lines at the Eastham Unit. Corroded pipes are present here! The lead is exceptionally problematic because one of the detrimental health effects is high blood pressure or hyper-tension.

New Afrikan/Black men have a predisposition for high blood pressure! So now we are looking at a disproportionate number of New Afrikans incarcerated here at the former slave planation of Eastham. We factor in the deadly extreme heat and the heightened risk of heat injury and death; couple that with the consumption of toxic water, and this is a textbook example of an 8th Amendment US constitutional violation (cruel and unusual punishment).

Now, the first thing the professional liar Jason Clark will say is: “There are no traces of lead or copper in the Eastham water supply.” Jason Clark is the spokespersyn for TDCJ, he is paid big bucks to lie! If I had listened to Clark and the rest of the TDCJ liars in 2015, I would have ceased my exposure and investigation, but I know better. I continued to press the issue, and in June 2016 I was vindicated.

Right now, as I speak to you through this essay, my anarchist comrades at the Campaign to Fight Toxic Prisons are beginning to pore over data contained on the website operated by the Texas Commission on Environmental Quality. I have asked Panagioti Tsolkas to ask college-educated toxicologists to study the data so that we can come up with a respected and authoritative opinion about the toxins present inside the Eastham water system.

I am requesting more free-world citizens help me force TDCJ to allow an objective and independent water quality testing organization to be allowed to enter Eastham and test our water from the taps in our cells! Oh yes! I've been doing my homework and TDCJ has been fraudulently manipulating the sample point so inaccurate lead and copper readings are recorded!

I am a New Afrikan Black Panther, so of course I have a vested interest in protecting the health and lives of black people – but my commitment doesn't stop there! Some of you may be aware that I have been training a white man named Comrade Kado to be an effective jailhouse lawyer and human rights activist. Comrade Kado has fiery red hair, blue eyes and has been diagnosed with chronically high blood pressure!

There are white, black and latin men at Eastham who can easily succumb to the “silent killer” which exists in the water we are forced to consume. We have no other water source!

The reason why these types of environmental problems are so very pervasive inside Texas prisons is that prisoner lives are not valued. Society is constantly bombarded with negative images of the violent, belligerent and manipulative convict.

No-one wants to talk about the Marissa Alexanders, or my comrade Kevin “Rashid” Johnson, who exposed the abuse of prisoners in Texas and was banished to a hole inside a Florida prison. Rashid's “crime”? Having more concern for his fellow prisoners than he has for himself! And these are the types of stories the mainstream media ignores because they don't fit the narrative the “powers that be” want to be in the fore-front of society's collective mind. I humbly request that you start to question the oppressors in Texas and Florida.

I have a final word to offer on the topic of white supremacism and the rampant spread of neo-nazism in Amerika: Sisters and brothers, if we are extremely passionate about taking confederate statues down because they represent the vestiges of and legacy of white supremacy in Amerika, then we must become doubly committed to dismantling and abolishing the institution of legalized slavery in Amerika!

The United States leads the world in the proliferation of slave kamps and deadly gulags. President Donald Trump is a true reflection of Amerikan values and morals, he represents the cruel and harsh reality that we have been ignoring and unwilling to confront – until now! Dare to struggle, dare to win, all power to the people!

This essay is dedicated to the memory of the comedian, writer and civil rights activist Dick Gregory, October 12, 1932 – August 19, 2017.

Keith “Malik” Washington is a humyn rights activist currently incarcerated in Texas. He is a co-founder and chief spokespersyn for the End Prison Slavery in Texas Movement. Malik is a proud member of the Incarcerated Workers Organizing Committee (IWOC) and he is the Deputy Chairman of the New Afrikan Black Panther Party (Prison Chapter). Malik has been instrumental in calling for the abolition of legalized slavery in Amerika and he is very active in the Fight Toxic Prisons campaign. You can view his work at comrademalik.com or write him directly at Keith 'Comrade Malik' Washington TDC# 1487958 Eastham Unit, 2665 Prison Road 1 Lovelady, Texas 75851 (936) 636-7321 ext. (**009) 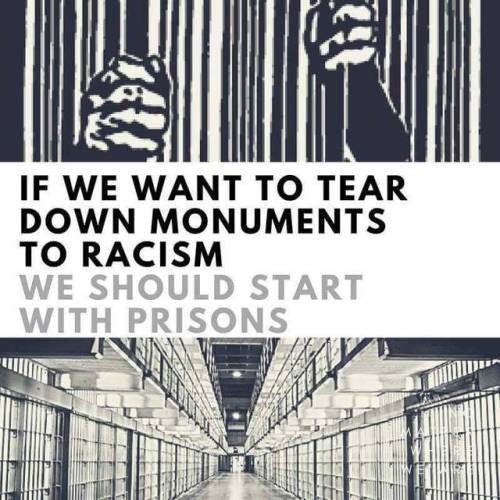