A call from the NYC Jericho Movement and Herman Bell's support crew:

We are asking that you email Anthony Annucci, Commissioner of New York Dept. of Corrections and also NY Governor Andrew Cuomo. Please use this sample letter

I am writing in concern and outrage over the unprovoked beating by Great Meadow C.F. correctional officers of Herman Bell, #79C0262.

On September 5th, with no provocation, correctional officers assaulted this widely respected elder. The recreation yard was being closed following a disturbance in which Herman had no part. He was told to line up with hands behind his back, which he did. When all other men on the yard were escorted through one door back into the prison, only Herman was escorted into a separate entrance and into a hallway with no one around except correctional officers—and with no surveillance cameras. In the hall, one officer began beating Herman in the face, breaking his glasses and knocking him to the floor. That guard continued to punch and kick Mr. Bell while he was on the ground. Around 5-6 additional guards arrived at this scene and joined in, punching and kicking Mr. Bell all over his body while he was on the ground. He was kneed in the chest and stomach, breaking two of his ribs. One guard then grabbed his head and slammed it into the ground three times, at which point Mr. Bell thought his life would be ending. He was excessively maced at close range all over his face and eyes, causing temporarily blindness and inability to breathe.

After being brought to the prison infirmary, Mr. Bell was not treated right away but was left alone for hours in an isolation cell. When staff finally looked in on him, he asked why he was there and was told he was accused of assaulting one of the officers. This charge is absurd.

The idea that this 69-year-old man would have hit an officer is ludicrous, as he was about to have a family visit (the first in two and a half years) and was beginning preparations for an appearance at the Board of Parole this coming February. People who had spoken to Herman on the phone the day before the incident attest to the fact that he was looking forward to the family visit with great anticipation, and that he was optimistic about his chances at the Board, given recent changes in parole regulations and the appointment of new commissioners. He had expressed similar thoughts and feelings to many of his friends and family. There is absolutely no doubt that he did not commit any infraction on September 5th; he also has not had a ticket in the past 20 years. He has never been accused of assaulting staff.

This brutal assault by Great Meadow guards constitutes not only staff abuse but also elder abuse. Mr. Bell will be 70 years of age in four months. He was badly injured in the beating. An X-ray, the only diagnostic screening he received for his injuries, revealed two cracked ribs, and he has a massive, swollen black eye and bruises all over his body. He has suffered severe headaches due to the beat-down, and the vision in his left eye – which remains completely red – is seriously impaired. Mr. Bell requires both a CT scan of the head and an ophthalmology examination.

I write to demand that you take these actions:

That Herman Bell be immediately given adequate medical screening and attention at an outside hospital;

That CO J Saunders and the other officers responsible for the beating be fired;

That Mr. Bell be moved to a facility where his family visiting can take place and be rescheduled at the earliest possible date. 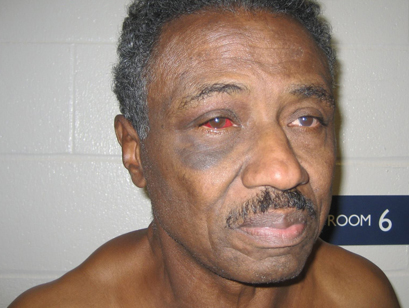