Murder at the Ramsey Unit, Texas: A Look at the Administration's Damage Control Efforts and Retaliation Against Whistleblowers

Odd as it seems – seeing prisoners left for dead or killed by guards is nothing new to me.

The reason this may seem odd is due to the fact that each death was during my seven-year stint in solitary confinement, in which I was a prime witness or in earshot of a direct witness. It seems that the Ad-Seg Transitional Program (ASTP), where I now am, is no exception where the killing of prisoners is concerned, as I was recently in the proximity of another. And of course another cover-up.

The fact that the ASTP and Ad-Seg are supposed to be controlled environment (e.g. no movement without guard escorts) makes this case more odd, and obviously a prison-assisted murder.

Some prisoners see the in-cell televisions as an advantage and deem the ASTP worthwhile, but I see it as the beginning of another deliberately failed project designed to conceal the ineffectiveness of solitary confinement-like conditions.

Unlike the other programs that appear in the TDCJ newsletter “The Echo”, showing smiling prisoners holding certificates of completion, giving testimonies of success and so on, the ASTP program is a literal death bed and cesspool, sending people back to ad-seg conditions, that needs to be overhauled or shut down.

On January 17th 2018, a Black prisoner by the name of Kenneth Johnson (known as “All Around”) proved that these death beds exist. But this wasn't your typical prison death.

What made this murder unique is what led up to and enabled it. During the entire ordeal the cell block guard slept at the dayroom table while the excited voices of prisoners calling him echoed throughout the adjacent cell blocks. He didn't wake up until a prisoners threw water on him through the cell bars.

The suspect openly confessed to guards what he'd done before he was removed from the cell; was allowed to leave the cell unhandcuffed, using the opportunity to blow farewell kisses to an imaginary audience; then allowed to briefly roam the hallway explaining what he'd done to guards.

Stranger than this, Johnson was left as found for quite some time without the assistance of medical care while the weapon (a radio coax cable) was still wrapped around his neck.

Even stranger than this, a guard claimed that he slightly struggled to breathe, which goes back to the fact that life-saving CPR wasn't provided until well after a layman would recognize that it was no longer needed.

The delay in medical care was because no medical staff are assigned to work night shifts, so they don't show up until 6:30 am. So essentially, if Johnson still had a pulse when he was found, this flawed custom of absent nightshift medical staff prevented him from being saved, or at least having a chance to be saved.

I will summarize what I witnessed and what was told to me by other witnesses, as well as show how I was targeted and had my legal work/law books and property confiscated for sending out a previous report the day Johnson died.

In a previous report, I explained how a witness told me that Johnson was found lying on the ground, which turned out to be a false statement specifically designed to attack my credibility, along with other lies. I got a chance to speak with witnesses who lived next door to Johnson, and their reports were all consistent with each other. It is now a verified fact that Johnson was still in bed when the confessed killer was removed from the cell. Prisoners that could see him being taken downstairs to the first tier on a gurney state that Warden McMullen waited until they were in view of the cellblock surveillance camera, then “pretended” to perform CPR. Before this, the escorting guards stood around until the warden came.

This explains why it took over thirty minutes before CPR was attempted, even though none of the officers could say whether he was already dead. Other than the bogus crime scene report generated by the inmate lackey, the previous report I wrote is consistent.

The Ramsey Unit's administration reacts to prisoner deaths just like the Clements Unit administration – that is, by damage control and retaliation. Immediately after the incident, the 2 West Cellblock was put on lock-down for several days, while the cellblock I'm on and the rest of the prison functioned like nothing had happened.

Between January 18th 2018 and January 22nd, many investigators and administrative personnel visited the prison. Ranking staff quickly had a germ-filled and neglected storage area on the cellblock cleaned and painted; health notices were posted on the wall; the community water cooler was switched out with a new one and kitchen staff were in full compliance.

On January 22nd 2018, lieutenant Joe M. Lopez came to the cellblock hurling threats and furious – not because we'd done anything wrong, but simply due to the amount of heat Warden McMullen is under that passed down the chain of command to him.

“You can kiss all of that legal property goodbye, it's mine.” Lopez said. “Write about that”, he laughed as he went to the second tier to harass the prisoners up there. Little did I know that we would keep his word. On January 23rd 2018, an organized group of officers including Sgt Prichard, Sgt Rudd, and a stocky Hispanic sergeant whose name is unknown deliberately waited until I went to school and then raided my cell while my cellie Tavorice Jessie #1502109 (better known as Dallas rapper Yung Pigg) watched.

They were methodical with their confiscation as they took all of my legal work, including document evidence for two pending 1983 federal civil suits, civil litigation books, all of my writings, transcripts, educational material, all of my books, stationary items, carbon paper, personal/legal mail and family photos.

Jessie made an effort to protest but was asked by Sgt Rudd “is this your property?”, while pointing to a bag of books. Jessie confirmed that they were his and was told to move them away from what belonged to me or they'd be taken. Essentially my whole life was in this property.

I spoke to Prichard, the stocky sergeant, and Lopez about the confiscation. I was given mixed responses, from saying that they couldn't remember who took it, to that I had too many books and everything was improperly stored, to the property possibly not being mine. Once I debunked all their bogus reasons, the stocky Hispanic sergeant admitted that Warden McMullen did it “to flex” and in response to all of the heat he was under, since he's aware of my interest in reporting the death.

The surrounding cell blocks that house general population prisoners weren't searched, which exposes that the search can't be justified as being part of the investigation. The murder happened on another cellblock.

Who was Kenneth Johnson?

I've been knowing Johnson for a while. In fact he was my neighbor while I was at the Clements Unit. We often exchanged reading material that we both have a common interest in. We were even transferred to this program at the same time.

Before his death, he was within six months of being released. He had plans to start a trucking company called “All Around Trucking” and told me that he would invest in hiring convicted felons. He was from the Dallas area and already had a list of prisoners from the area that he intented on hiring upon their release.

It's been rumored that a prisoner was able to have his family contact Johnson's sister, who had been told that he died of natural causes, not killed while the cellblock officer slept. It is also rumoured that this officer was fired immediately. His family needs to know the truth, so someone please locate and contact them.

Please contact the Ramsey Unit: 281-595-3491, request Warden McMullen, and demand that all of my legal property and law books be returned to me. They never gave me a copy of the confiscation form so they can throw away whatever they want without having to account for it. I have a right to have my legal items.

Prison staff are giving me the run-around and are deliberately ignoring me. We all know that the grievance program is useless. At this point, the loss of my property is interfering with my correspondence to the courts, any motion I need to file during the litigation process of my law suits, my political studies, and incoming mail that I need to respond to. The purpose of this confiscation was to do just that. I really need your help.

Dare to struggle, dare to win! All power to the people!

Jason Renard Walker is Deputy Minister of Labor of the New Afrikan Black Panther Party (Prison Chapter) and one of the contributors to the Fire Inside zine. 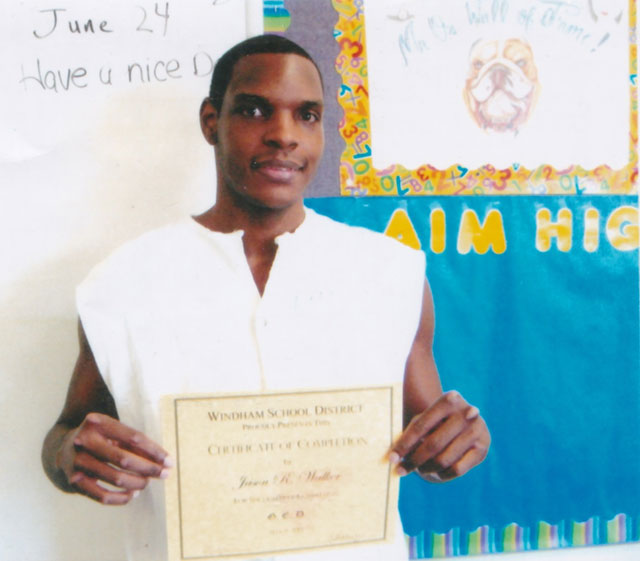