This November, prisoners across 14 states in Brazil went on a six-day hunger strike against abusive and unsanitary conditions, inspired by the USA-wide prison strike on September 9th 2016. The action took place in the context of immense administrative corruption, and a complex situation involving “criminal entities” in the region. While the slow process of obtaining information about the end of the strike continues, the Incarcerated Workers Organizing Committee is publishing this background information to build solidarity for the striking prisoners, and shed light on the obscure universe of Brazil’s prisons.

In January of this year, two of Brazil’s largest criminal organizations – the PCC (Primeiro Comando da Capital), an organization created in the prison units of São Paulo in the 90's, and the Comando Vermelho – broke their alliance. Until then, they had worked closely together and considered each other "sister organizations."

This year, the PCC started a special project of commercial expansion, hoping to become possibly the biggest "criminal organization" of the country. Dominating drug traffic, weapons, illegal transport, illegal cable TV, among other sources of income of the "informal market." The PCC had a strategic interest in the region, because Northern Brazil passes through the so-called San Francisco route, where the majority of the cocaine produced in Peru and Bolivia circulates to get exported to Europe. In January, violence broke out between the PCC and the Família do Norte (NDF), a group allied with Comando  Vermelho, in prison units in the North. At least 56 people died in the clash.

Having established and stabilized its control in São Paulo and its expansion throughout the country, the PCC needed to deal with the situation in Rio de Janeiro: it broke relations with the Comando Vermelho and made a failed attempt to unite two rival factions of the CV in Rio – ADA (Amigos dos Amigos) and TCP (Terceiro Comando Puro). In recent years, the State of Rio made one more pathetic creation called the Polícia Pacificadora (“Peace Police”). The UPPs (Unidades de Polícia Pacificadora) were stationed in different favelas of the state, and caused an immense instability in the disputes for these territories. With the bankruptcy of this project officially declared this year, many of these territories were left "open," causing an escalation of the violence already present in these environments and throughout the state. Given this situation, the Comando Vermelho saw a glimmer of hope that they might be able to retake those territories (the CV controlled all of the State of Rio in the 80's and 90's, suffering huge losses in the beginning of the 200's with the growth of the ADA and TCP). Some of those considered as leaders of the Comando Vermelho are now incarcerated in federal prisons in other states, including in RDD (“Regime Disciplinar Diferenciado”, a kind of SUPERMAX facility where the prisoner stays in the cell for 22 hours of the day).

At midnight on November 7th, prison rebels coordinated a work stoppage in facilities across 14 states.

The strike, initiated in federal prisons by these leaders, had the primary objective of securing the transfer of some of these imprisoned leaders back to Rio de Janeiro. It's important to note that not all of the prisoners associated with the Comando Vermelho spontaneously adhered to the strike initially. However, once it was declared, many perceived the potential of the movement and started to incorporate their own demands. It was in this moment that September 9th 2016 served as inspiration and motivation.

Here is the strike call out that circulated throughout the prisons.

1 – ANY KIND OF FOOD PROVIDED BY THE STATE;

The objective of this strike:

1 – IMPROVEMENTS IN THE HEALTH CARE PROVIDED IN EVERY PRISON UNIT, WHERE TODAY MANY DIE FROM THE GOVERNMENT NEGLIGENCE THAT DOES NOT HIRE DOCTORS OR INSURE ADEQUATE MEDICINE AND EQUIPMENTS TO TREAT THE PRISONERS;

2 – DENTAL CARE IN THE PRISON UNITS;

3 – ADEQUATE WARDS FOR MEDICAL TREATMENT (ESPECIALLY FOR TUBERCULOSIS) IN THE PRISON UNITS;

4 –  OVERCROWDED UNITS, SOME CELLS MADE FOR 8 PRISONERS SOMETIMES HAVE MORE THAN 40 SHARING THE SPACE;

5 – LACK OF WORK AND STUDY OPPORTUNITIES INSIDE THE PRISON UNITS, ONLY A FEW HAVE ACCESS TO THAT RIGHT AND MANY ARE FORGOTTEN AND HAVE THEIR RIGHTS MASSACRED ON THE ACCOUNT OF THE STATE'S INEFFICIENCY;

6 – PRISONERS ARE IRREGULARLY TRANSFERRED IN A CLANDESTINE WAY, WITHOUT THE JUSTICE AND HUMAN RIGHTS SECRETARY OR THE PENAL COURTS KNOWLEDGE OR GUARANTEE, AND SUFFER FROM INHUMANE TREATMENTS, PSYCHOLOGICAL AND PHYSICAL ABUSE AND TORTURE IN PRISON UNITS FAR AWAY FROM THEIR FAMILIES;

7 – PRISONERS PUT IN ISOLATION FOR UNDETERMINED PERIODS WITHOUT ANY PLAUSIBLE JUSTIFICATION;

Prisoners refused to eat breakfast that morning, prompting the guards to toss out massive amounts of food, much of which is barely fit for human consumption to begin with.

The photos below are from the Cadeia Pública Jorge Santana facility, showing what the guards did to the food, since the prisoners refused to eat. 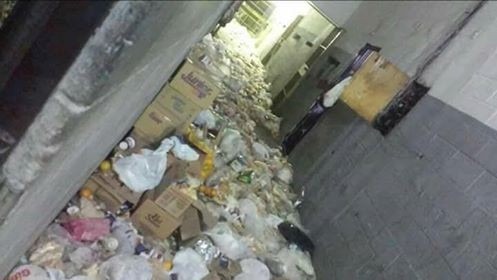 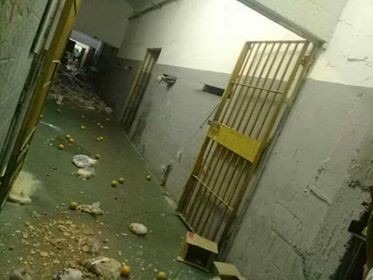 Prisoners banged on the prison bars, letting guards and other prisoners alike know the strike was on in full force.

Throughout the week, our contacts in Brazil stayed in close communication with the families of the striking prisoners. Family on the outside were extremely concerned with the state of the health of those men who had nothing and who were sacrificing everything in the strike.

In all of the state of Rio, prisons are overcrowded. The water supply is rationed. There are prisons where the quota for each prisoner is four glasses per day for everything, including taking a bath, drinking, washing clothes, and cleaning the cell.

The food, besides being of absolutely abysmal quality, opens even deeper questions: there are many pork factory farms near the prisons. The directors of the prisons usually get money from re-selling to these factory farms the food that is "left over." In general, the food that comes ready is left out in the sun to sour, and so is rejected by the prisoners, so this way more food is sold to the factory farms for the pigs and the directors get to put more money in their pockets. It's important to highlight that this happens in almost all the prison units of the state and the prison administration exchanges the sole sustenance of the prisoners for just a little more change in their pockets.

The medical services are practically nonexistent. Prisons with more than two thousand men have merely one doctor on staff every day. There is no supply of medication and hospital equipment from the State and sometimes to get just a simple aspirin, the prisoner needs to be practically almost dying.  Lung problems (like tuberculosis, bronchitis, and asthma) and skin problems (like leprosy, cryptococcosis, and sporotrichosis) are abundant in the prison population, enough to be classified as actual epidemics. The right to go out into the sunlight, guaranteed by law to be one hour a day, is not respected. Prisoners of the state sometimes go months without leaving their unsanitary cells.

There are no psychiatrists and there are only a few psychologists.

Dentists are rare and, where they do exist, there are not enough of them for how much they are needed.

There is an immense portion of the incarcerated population of the state that could be out in the free world, because they still have not been convicted, but instead they are incarcerated.

The work opportunities are true examples of the continuing maintenance of slavery in the country. The prisoner who works in Rio de Janeiro receives as payment a day less in prison for every three days of work, and has a monthly salary of R$545 (USD$165.33). The minimum monthly salary of the country is actually R$937 (USD$284.25). There are no labor laws for prison labor.

For many prisoners and their families, the end of the strike was a relief. Throughout the week, many prisoners with already extremely debilitated health were showing signs that they would not be able to last very long in a hunger strike. Many started passing out, throwing up blood, getting dizzy spells, etc. Throughout all the prison cells of the state there was already talk of the possibility of rebellion, news of which was received with fear from their families, because generally in Brazil when there is rebellion, the State responds immediately with EXTREME violence. All you have to do is remember the case of Carandiru in 1992 in São Paulo, where prisons rebelled and the response of the State was to send in police and kill 111 people.

The leaders of the Comando Vermelho forbid the families from making any public comment in support of the strike, which made the whole movement very difficult because, besides dodging state repression, we also had to deal with interdictions from the Comando Vermelho.

The strike ended today, so it's still early to make a very profound analysis of its results. But certainly, many of the men that the state holds hostage in prison units walked away from it emboldened, and the struggle continues.

“In the name of the few with whom I was able to get in contact during the strike (telephone use was restricted to direct family), I want to pass on to everyone here gratitude for the support and solidarity. When I told them that there were people all over the world who knew about the strike and demonstrating their support, especially prisoners all over the world, this information transformed into energy and empowered many of those men. The support that everyone here gave was very important for this also I thank you. I tried to put together here all the information that I gathered over this past week, as little as it is. I hope that this information helps understand what happened here and shed a little light on the obscure universe of Brazilian prisons.”

The strike officially ended on November 13th, and information is still scarce on why. We’re working with our contacts there to learn more. We know though, that this strike is a significant victory for the prison abolition movement in Brazil, in which intra-rival prison group conflict grew into politicized and wide spread collective resistance. As prison rebels gather momentum here in the US, may we continue to inspire and support one another across borders until every last cage is empty. 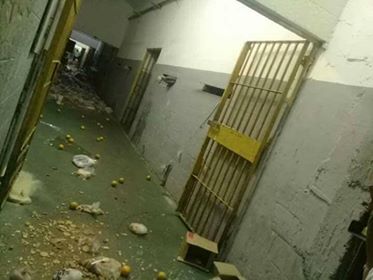