Revolution will not be televised: Fifty Years after the Black Panthers, Now What?

By A Living Survivor of Chronic System Incarceration

There has never been a free people, a free country, or a real democracy on the face of this earth. Yet, the vast majority of Americans believe in its ideals. In the hopes of conveying a belief, the Oval Office is occupied by a vanilla wafer, not of slave blood, but a freeman of color who does the bidding of his handlers. This is America’s exemplification of democracy; however, the United States enslaves a quarter of the world’s prisoners, and places those who are outside the walls into indentured servitude. Insanity is when a shout of “Let’s Make America Great Again” is followed by bodies being strapped to student loan debts, medical bills, and IRS garnishments in exchanged for life sentences in concrete prison cells.

Fifty years after the Black Panther Party, an armed revolutionary party that fought for black self-determination, was infiltrated, compromised, and decimated, pathetic African American leaders faced with blatant racist policies, though despite praise of achievement toward equality, and feigned ignorance of the fact brother Panthers were jailed and imprisoned on trumped-up charges, and should receive pardons, march nonviolently against the disproportional political and economic system in practice within the United States. As oxymoronic as placing in context a black Trotskyite, and going to war, it would be clear even to them if after seventy-five years of marching, and equality had not been achieved, an armed struggle would be the solution. It’s these African American Negroes which, while our Brother Panthers were sold out and fed to corporate America’s rapacious economic growth, sold positions in the United States- as house servants in Candyland.

Does the average African American think he or she is beyond America’s despotic disproportionate distribution of equality? How long has it been since slaves needed a pass to leave plantations, blacks were segregated and Jim Crowed or Negroes were red-lined into urban deserts? It happened to me yesterday, as I walked from my cell to a privatized state phone, watched by a million cameras, as contents of my recorded phone calls can be used against me in a court of their laws to stage a conspiracy. The parallels from my experience of armed guards posted at checkpoints, licensed by the state, ready to kill non-whites based on a subjective threat, are drawn between Afghans and Palestinians detained and being bombed by drones. It was necessary for the United States’ agencies of counter-revolution to kill the Black Panther Movement, so the linchpin for mass incarceration, zero tolerance anti-crime fascist policing, and the proliferation of the killing of unarmed black men could be set and prevent any uprising for freedom and liberty.

In efforts to protect the ruling class’s imperialist system of economics, the political system of the United States, with every uprising they used criminal justice policies as a way to sever the head from the body and have gone as far as removal of genitals as a message to those would be leaders. Case in point: Nat Turner’s uprising that forced the National Guard to rescue slavee owners; the Panther’s armed usurpation of the California’s Capitol while legislators were in session; D-Yard Nation uprising after the death of Comrade George Jackson that took over the yard; the riots in 60’s that threaten to burn down the United Sta 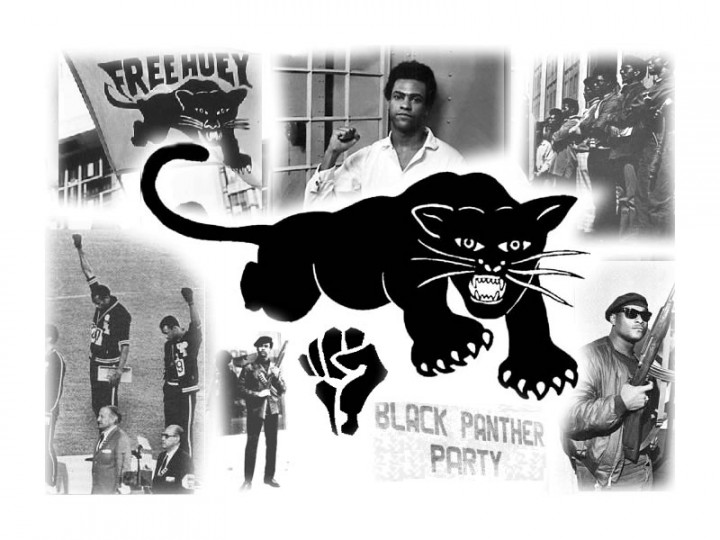 tes’ cities. These events sparked the political consciousness of convicts, although every battle ended in death of its leaders.

However, the consequence of an armed struggle for the self-assertion of freedom that results in defeat is an elevated fear level, based on the ruling class’ socially constructed link to criminal violence. This allows for an increase in the funding for policing and increase restriction through control. This is why politicians’ create a climate of fear and was the explanation to why Johnson’s redistribution of wealth failed, yet produced a dangerous black militant class that rioted in return of whites’ generosity. It can be argued that the public was deceived into believing that the Fugitive Slave Law, Mann Act, Harrison Act, Hale Bogg’s Mandatory Minimum, Wickersham Commission, Omnibus Crime Control and Safe Streets Act, Comprehensive Drug Abuse Prevention and Control Act of 1970, Law Enforcement Assistance Administration, Anti-Drug Abuse Act (1986 Act that produced the dubious “100 to 1” ratio that copies the Pig and Chicken laws that disproportionately gave black males longer sentences than whites), Clinton’s Community Oriented Policing Service (COPS), 1994 and 1996 Omnibus Crime Bills, Anti-terrorism and Effective Death Penalty Act (AEDPA) would allow them to sleep comfortably at night. I cannot argue whether or not Americans comfortably sleep after trillions on trillions of dollars are spent on control and surveillance of boogie men, but rather it is systemic repression delivered in an opioid delusion on a beautyrest, which is scarier. However, I know it is beyond the realm of reality to believe that the containment of black and brown bodies will free white Americans; moreover, I can argue that the United States understood that the Panthers and all the organizations that presumably followed would have challenged freedom. This crisis was the reason for state and federal funding of military style policing that produced the carceral state, mass incarceration and has allowed the murder of unarmed black males to be justifiable deaths.

In order to preserve the United States’ oppressive defunct political and economic system, African American Negroes have accepted a commercialized version of Ourstory. The governing narrative of past, present and future events controlled by us is Ourstory. Ourstory: heroic struggles that allows us to make sense of the world, woven into ethnic richness, which allows self-determination and pride to radiate from a culture of being perverted by a commercialized presiding fiction, which has allowed us to behold ourselves and our place in the world as satirical entertainment for others.

For example, African American Negroes thought that Beyoncé’s commercialization of the Black Panther’s brand was representation of equality. Elaine Brown, former member of the Black Panther Party, pointed out that “Beyoncé’s performance celebrated women of the Panther Party.” Elaine Brown’s statement is true, yet it’s a whitewash of the facts and a fictional tale of Ourstory that does not allow Panthers to be honored like revolutionaries are in Cuba, but appear as women in costumed during America’s reenactment of its past battles and genocides.

When I read her comments, I could only think back to Edward P. Jones great novel, The Known World, a story about Henry Townsend, a black plantation owner in south that grows up as a slave purchased out of slavery by his father. The story dealt with the complication of the institution of slavery and the role freed blacks played in the participation and preservation of slave culture. The methods African American Negroes have and continue to use to advance in status made vivid by the part in the novel where Henry as child stood outside Master Robbins’ mansion and waited to groom his master’s horse. The African American Negro insistence to be allowed into white America is Henry “shivering in the rage he tied around his feet...Robbins told his slave shoemaker ‘make the boy something good for his feet. He [Robbins] told the servants who ran his mansion that Henry was to eat in the kitchen with them and forever be clothed right.” Today Henry still waits outside his master’s mansion in the finest vines in belief that they’ll be clothed, and fed by the system. This is the reason why they watched calmly as Black/Latino criminals, undocumented immigrants, welfare queens, crack heads, and super-predators were created and imprisoned, with racialized rhetoric, laws and policies and marched for equality in preservation of this oppressive defunct system. Time has made African American Negroes’ suppositions correct, though Ourstory is now white washed and cleansed and does not reflect race laden criminal policies that were used to provide a place in Candyland for African American Negroes and cells for those who fought against the class-biased system of oppression.

Fifty years after, the Black Panther Party was infiltrated, compromised, and decimated, I wondered, Celebrate? What? Why? Do I reminisce on those rats that now tell their story with pride? Should I celebrate all the dirty cops that planted evidence, beat and lied on the stand who are now firmly in place inside the super structure that uses broken glass laws to harass black lives? It’s African American Negroes who can look forward, with greasy chicken lip grins, without looking back to pull up our brothers. Brothers, who were sold out and now rot in filthy sterile hermetically sealed cages, as I sit too, political conscious, with neo-prison Bob Marley dreads parted; stoned faced like my facial expression was chiseled in granite by Emory Douglas, and all that’s needed to complete the picture is a gun, and a fist, raised with bruised white knuckles and clenched in solitary.

Though desperately missing reality being that I cannot celebrate the abstract liberty of living in prison like educated, color-blind African American Negroes, with programmed neo-leftist wives, in split level homes, student loans, Obama Care, and IRS garnishments, experiencing all the abstract liberties, but devoid of basic human satisfactions. They do not despise the system that caused mass incarceration in fact deplores it but helped fund it, and watched as it seized upon powerless black men and hacked them to death, removing their genitals, their bloodies body chained, yet beyond the sight of ocular sameness; however within accepted deprivation of freedom and equality. The African American Negro experience post-Panther revolution enjoyed, and necessary to earn a position in overpopulated civilized society. Let them celebrate; I can’t, the bell just rung, and I got lock in. What! 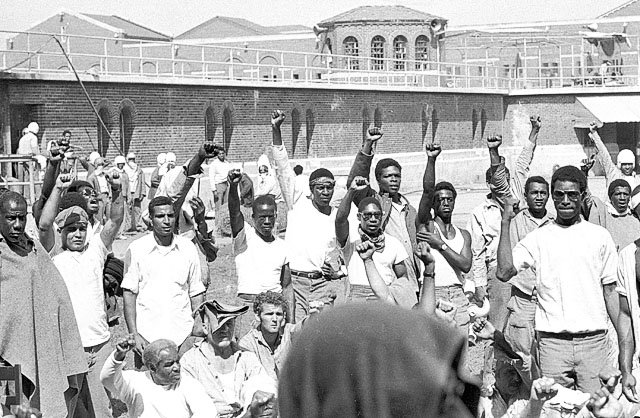