STATUS UPDATE! - From Comrade 'Malik'
at McConnell AD-SEG Unit
11-08-2018   *** By Keith 'Malik' Washington
Peace and Blessings Sisters and Brothers!
I am requesting that you post and share tis update Far and Wide. First, I want to let ALL of you know that conditions are gradually improving here at McConnell and I attribute that to the pro-active and positive actions of Senior Warden Phillip J. Sifuentes on numerous occasions - about conditions here as well as issues that effect me directly.
I can tell you that he has been addressing the issues he has "POWER OVER." However, I need all of you to know that my housing here was something Extra-ordinary and directed by High Ranking TDCJ Administrators in Huntsville, Texas.
In order for me to get released from AD-SEG We are going to have to apply pressure in Huntsville swell as alert Legislators in Austin, Texas during this Legislative Session!
Health Issues
In regard to my physical health, I am glad to report that I have gotten used to the dosage of the Two Seizure Meds I take. It is no longer Super Hot in Texas. Fall is here and a brief winter is coming. The Two health issues that I have which are not life threatening but do need addressing are:
1.) I have a wisdom tooth that needs to be pulled.
2.) I need Glasses!
I've recently shaken off a recent bout of depression which I attribute to my on-going and lengthy stay in a solitary confinement setting.
* We must remember!! These CONTROL UNITS like McConnell  AD-SEG were designed to break the human psyche and spirit. These ARE NOT places of rehabilitation - FAR From it!
TDCJ and the State sent me here with the express intent on punishing me For Supporting this year's Abolition efforts which originated in South Carolina! I was brought here for standing up For prisoners' rights! - Period.
TDCJ and The State seek to Destroy y Rebellious Spirit and break my Will to Resist! I'm GLAD TO REPORT - it Ain't workin'!!
ACTION ITEMS
On Thursday - October 25th, 2018 I attended a hearing here at McConnell - AD-SEG held by the Texas Department of Criminal Justice - State Classification Committee better known as S.C.C. The S.C.C. representative From Huntsville - TDCJ Headquarters was a white male named Mr. Armstrong. He asked me did I have anything to say - so I asked him:
"Why was I returned to AD-SEG after being released to Ramsey I Unit in order to attend the Cognitive Intervention AD-SEG Transition Program?" - end of quote.
Mr. Armstrong Feigned or was totally ignorant or out of the proverbial loop on this.
Instead of answering my question he attempted to re-direct the Focus to my rather large Religious Beard. He stated that my File indicated that I was permanently barred From growing a Religious Beard!!
As you can see, my File has been tampered with and Sanitized because I did in FACT win a Civil Lawsuit last year which allows me to grow a Fist Length beard and wear my KuFi prayer cap throughout ALL TDCJ Facilities.
I did explain this to Mr. Armstrong. McConnell - AD-SEG Unit Supervisor - Assistant Warden Gene Miller and Law Library Supervisor Candace Moore - were in attendance at the S.C.C. hearing and they had absolutely nothing to contribute to the conversation (At least while I was in the Room!!)
* The outcome of the S.C.C. hearing was Mr. Armstrong refusing to release me from AD-SEG and Relying on the 2016 Fabricated Riot Case that S.C.C. Rep Kelly Enloe released me on in June 2018!!
Sisters and Brothers more that ever I need a Lawyer who can advocate on my behalf so I can g released From AD-SEG and start Focusing on making PAROLE!
This is a Priority Action Item.
ACTION ITEMS....
In order to clear the path for my Release From AD-SEG and possible Parole in 2019 or 2020 I have dismissed all pending Law suits against TDCJ and their employees. This was a tactical/strategic move!
I did this so Attorney Daphne Silverman could Focus Strictly on getting me released From AD-SEG and then advocating For my PAROLE.
* Thus Far I HAVE NOT had any Direct Contact From Attorney Silverman of Professor Azzurra Crispino. I am hopeful with your help they may contact me and explain what we must do to secure of obtain representation From The Silverman Law Firm.
(daphnesilverman@gmail.com)
One of the hardest things For a politicized Texas prisoner such as myself to Find are passionate, dedicated, and qualified Attorneys and Legal Representatives who will not only Advocate and Represent us but to STAY THE COURSE!! Nobody Wants to get involved or commit - so basically in that Aspect of Struggle We Are on our own!
IF there is one lesson that I've learned From Professor Victor Wallis it is that I MUST BE patient, respectful, and realistic toward those who provide Legal and Media Support. At times  I have been impatient, overbearing, and insensitive toward those who have provided excellent Legal and Media Support and as a result of my behavior I've chased Folks Away!!
HARD Lesson Have been Learned indeed but that is why it's called 'Struggle' I suppose?? I'm not just struggling against the system I'm struggling Against Myself!
IF not For the unwavering support of a small but dedicated network of scholars, Activists, and Media Reps I would have ben killed or beaten to death a long time ago!! I just want everyone to know that I do appreciate all the support I've received and I believe that we have great Victories lying Ahead of us.
Dare to Struggle, Dare to Win
ALL Power to The People
-END-
Outside Solidarity, Prisoner Resistance
Comrade Malik, Keith 'Malik' Washington, TDCJ, Campaign to End Prison Slavery in Texas
Image 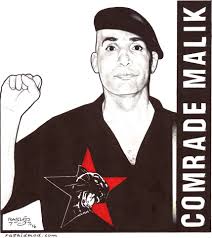