Washington, D.C. Meeting at Farragut Square at 11 AM EDT.

On Wednesday October 23, human rights activist in New York City, Washington DC, London, U.K., and Kingston, Jamaica will deliver a request for humanitarian intervention to the United Nations drafted by US prisoners in South Carolina.

For years, prisoners and their families have been decrying the notoriously bad conditions within South Carolina prisons, as the US Department of Justice has demonstrated through reports and consent decrees with states in violation of basic human rights protections. However, this process has not produced notable improvements in prison conditions.

The UN has been many steps ahead of the United States in its recognition of human rights globally, and prisoner's rights in particular. The UN recognizes that solitary confinement is torture after 15 days, even though long-term solitary confinement remains common in the US. A recent study has suggested that any period of time in "restrictive housing," increases the likelihood of a former prisoner's death following their release. These are  common conditions throughout US prisons that have an impact on the brains of prisoners and impair their ability to survive.

After the deadliest day in US prisons in a quarter century at Lee Correctional Institution in South Carolina in 2018, prisoners led a call for a national prison strike against their repressive conditions. They issued ten demands, none of which have been met to date.

Beyond their national demands, there are certain conditions specific to South Carolina that are particularly repressive. The blocking of sunlight with metal plates, has been one of the key conditions that prisoners have decried in recent years. This practice combined with long lockdowns, the adding of meal slots in general population cell doors, denial of outdoor recreation, and limited access to showers, has produced solitary-like conditions across the whole of the general population at high security prisons in the state.

These practices deny the basic humanity of prisoners by the South Carolina Department of Corrections (SCDC). These are the conditions that produced the violence at Lee Correctional Institution in 2018. They are reflected in this NBC News report about South Carolina prisoner Allen "AJ" Capers, which shows Capers being dragged out on to the yard and left to die by two SCDC guards. SCDC have produced a record high suicide rate. They led to the drowning of Sinetra Geter-Johnson's baby in her prison cell, as guards neglected to help. In 2014, a Judge found that SCDC routinely violates basic rights of prisoners to mental health care.

Prisoners have attempted to find support through the legislature, they've sought lawyers willing to sue over the conditions, and they've organized national protests. None of their calls have been heard. The conditions within South Carolina prisons continue to get progressively worse and hopelessness has set in, as reflected by the record numbers of deaths and suicides in recent years.   In Alabama, another state that has had similarly horrendous conditions, even a DOJ report and major coverage in national newspapers have not improved the conditions for prisoners. There is no reliable process for redress for human rights violations within the US system.

When incarcerated people can no longer find a basis for hope they struggle to see a path forward. South Carolina's prison system has reached a breaking point, and right now it is breaking the mind, bodies, and spirits of human beings. Today, these prisoners have reached out to the world to urge international humanitarian intervention by the UN, in an attempt to ease the harsh conditions in South Carolina prisons. They take this step because they see no other path of redress.

To Whom it May Concern:

Re: Urgent Action Needed to Protect Lives and safety of prisoners in South Carolina

We the undersigned organizations write on behalf of people incarcerated in the state of South Carolina to ask for your immediate attention and help in addressing the human rights violations occurring at all level-3 prisons in the state. For the following reasons we request that the United Nations Human Rights Council dispatch a Special Rapporteur to investigate the torturous, cruel, and inhumane punishment of prisoners in South Carolina. South Carolina is known for  mistreatment of prisoners and deplorable conditions which reached a breaking point last year when Lee Correctional experienced the deadliest prison uprising in a quarter-century.

Prisoners at these level-3 prisons have been kept on permanent lockdown for over two years, confined to 9x11 two-man cells between 20 to 24 hours a day without access to any rehabilitative or vocational programming or movement around the compound of any sort. Prisoners also report a multitude of abuses such as withholding water, 24 hour solitary confinement without cause, mold, contaminated water, spoiled food, filthy air rushing in all day, no chairs, no tables, no radios, no television, no access to legal work, and no access to showers. Further, South Carolina Department of Corrections decided to cover all the tiny windows in the cells with metal plates so that no natural light or fresh air can come in. Thousands of people are existing in this manner, enclosed in a tiny space with another person and no materials or communication or anything else to pass the time.

The continuous solitary confinement and deplorable conditions have caused increased tensions and violence resulting in heightened suicide rates and violence which reached a boiling point in 2017 and ultimately led to the bloody uprising at Lee Correctional, these conditions have still not been addressed. The only measures SCDC have taken are to invest in cell phone jammers instead of investing in programming.

In preparation for this letter delivery to the United Nations South Carolina prisoners have outlined the following demands to improve their immediate conditions. These demands highlight the tortorous and inhumane conditions these prisoners are subjected to on a daily basis.

1. We demand academic and vocational programs that will help prisoners in the state of South Carolina learn a trade and/or certificate to help prisoner's transition back into society and give them something productive to do while in prison.

3. We demand the South Carolina Department of Corrections remove all steel coverings off of all windows prohibiting sunlight from entering through the cell windows.

4. We demand the South Carolina Department of Corrections provide an adequate dietary meal that meet the daily caloric intake of at least 2,200 calories, especially on Saturday and Sunday when prisoners are only given 2 meals a day (i.e. breakfast and dinner). Prisoners are not given lunch on Saturdays and Sundays.

As detailed below the conditions laid out in the demands of the South Carolina prisoners are in violation of a number of sections of the UN Standard Minimum Rules for the Treatment of Prisoners:

71. (5) Vocational training in useful trades shall be provided for prisoners able to profit thereby and especially for young prisoners.

(6) Within the limits compatible with proper vocational selection and with the requirements of institutional administration and discipline, the prisoners shall be able to choose the type of work they wish to perform.

77. (1) Provision shall be made for the further education of all prisoners capable of profiting thereby, including religious instruction in the countries where this is possible. The education of illiterates and young prisoners shall be compulsory and special attention shall be paid to it by the administration.

(2) So far as practicable, the education of prisoners shall be integrated with the educational system of the country so that after their release they may continue their education without difficulty.

21.(1) Every prisoner who is not employed in outdoor work shall have at least one hour of suitable exercise in the open air daily if the weather permits.

78. Recreational and cultural activities shall be provided in all institutions for the benefit of the mental and physical health of prisoners.

10. All accommodation provided for the use of prisoners and in particular all sleeping accommodation shall meet all requirements of health, due regard being paid to climatic conditions and particularly to cubic content of air, minimum floor space, lighting, heating and ventilation

(a) The windows shall be large enough to enable the prisoners to read or work by natural light, and shall be so constructed that they can allow the entrance of fresh air whether or not there is artificial ventilation;

20. (1) Every prisoner shall be provided by the administration at the usual hours with food of nutritional value adequate for health and strength, of wholesome quality and well prepared and served.

(2) Drinking water shall be available to every prisoner whenever he needs it.

It is for these reasons that we, the undersigned, again ask the United Nations Human Rights Council to dispatch a Special Rapporteur to investigate the torturous, cruel, and inhumane punishment of prisoners in South Carolina. This letter will be followed by an official complaint through the appropriate channels of the Human Rights Commission's Special Rapporteur procedure.

The Campaign to Fight Toxic Prisons 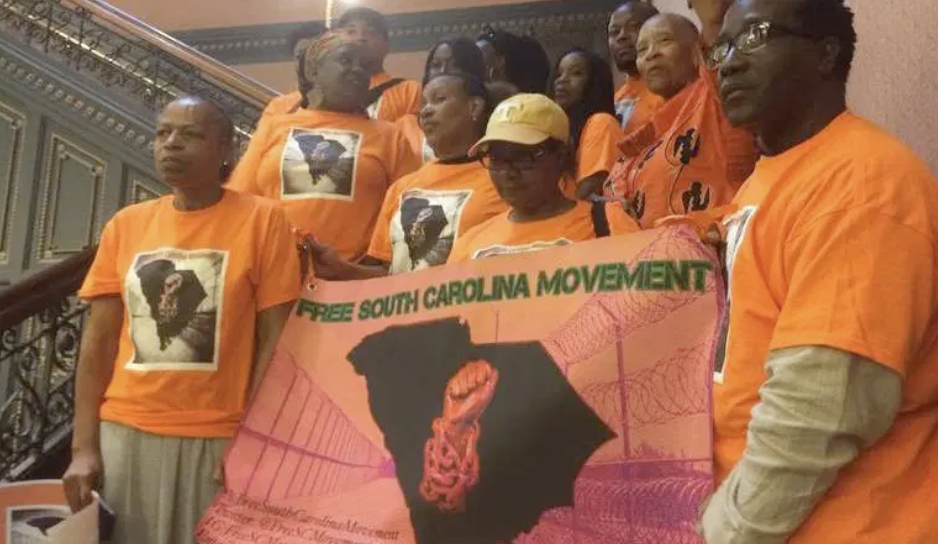