On April 22nd, 2020, there were two very important court decisions released by two separate jurisdictions that directly affect federal prisoners who have been impacted by COVID-19.

This article highlights the disparity in the type of justice meted out to prisoners who seek relief in the federal courts. Sometimes, as in this case, the relief sought could be the difference between life and death.

FCI Elkton is a low-security federal prison located in the Northern District of Ohio.

FCI Oakdale is a low-security federal prison located in the Western District of Louisiana.

At both locations, prisoners have brought federal suits pleading to be released to home confinement in order to escape the spread of the deadly coronavirus, which has ravaged both prisoners and staff at both prisons.

The prisoners seeking relief are mostly elderly and infirm. These prisoners have been deemed the most vulnerable and most likely to be infected by the deadly COVID-19 virus.

FCI Elkton has experienced six deaths from COVID-19. There have been approximately sixty confirmed cases of prisoners with the virus and approximately fifty staff members who have contracted the virus.

FCI Oakdale has experienced approximately ten deaths. It has been reported that approximately sixty prisoners have been infected, but there has been much less transparency at FCI Oakdale than at FCI Elkton, and many feel as if the Bureau of Prisons is obscuring the details in order to downplay the seriousness of the situation at FCI Oakdale.

The 8th Amendment of the U.S. Constitution provides protections to U.S. citizens from being subjected to cruel and unusual punishment.

There are also provisions in the U.S. Constitution which prohibit deliberate indifference to the health, welfare, safety, and medical needs of prisoners.

The federal court in Ohio ruled in favor of the prisoners at FCI Elkton and ordered the Federal Bureau of Prisons to begin releasing the elderly and inform to home confinement.

The federal court in Louisiana ruled against the prisoners at FCI Oakdale. The presiding judge seemed to admonish the prisoner plaintiffs by stating that the court would not become a "super warden" and that the BOP has the authority to act.

My question is this: What happens when we see prisoners dying and the BOP doesn't act? Is that not a time when the federal courts should intervene in order to preserve and save lives? Apparently, the federal courts in Louisiana have ignored the humanity of federal prisoners.

In my reporting, I often interject my emotions into the pieces that I write. As a prisoner myself, I am able to empathize with the plight of the prisoner who yearns to be treated humanely.

At this point, I want to set aside my emotions and direct your attention to some quotes from members of the U.S. Department of Justice.

Specifically, I am focusing on officials from the Western District of Louisiana, the very district that has blatantly ignored the human and civil rights of federal prisoners housed at FCI Oakdale.

In the April 2020 edition of the Prison Legal News, staff writer Bill Burton wrote an article entitled, "Former Captain at Louisiana Private Prison Sentenced for Conspiracy to Violate Ban on Cruel and Unusual Punishment." It is a short but enlightening piece of journalism that I highly recommend you read.

All five correctional officers who were defendants in the case wrote false reports in order to hide their complicity in the heinous act.

These prisoners survived, and the court ruled that there was a conspiracy to violate the ban on cruel and unusual punishment.

I want to remind you that federal prisoners at FCI Oakdale are dying. They are dying because the Federal BOP does not have a workable strategy to combat COVID-19 at FCI Oakdale.

This is how we must combat this virus. Wouldn't you think that the court in Louisiana would acknowledge that the loss of life at FCI Oakdale illuminates a blatant failure to protect? Or triggers a violation of cruel and unusual punishment?

Here are some quotes from Louisiana U.S. Attorney David C. Joseph and Assistant Attorney Eric Dreiband in response to the pepper spray case that was brought against the officers at this Louisiana private prison.

U.S. Attorney David C. Joseph said, "The defendant in this case ignored his role as a caretaker for prisoners [my emphasis] and violated the rights of those he was sworn to protect. My office is committed to upholding the laws of our land and the rights of all."

Dying from COVID-19 is a lot more serious than getting pepper sprayed in your eyes. It would seem that U.S. Attorney Joseph forgot that the federal prisoners at FCI Oakdale are human beings.

However, there is more! Assistant Attorney General Eric Dreiband had this to add: "This blatant abuse of power will not be tolerated by the Department of Justice. Today's sentencing demonstrates the commitment of the Civil Rights Division to vigorously prosecute those who inflict cruel and unusual punishment against inmates under their care." (June 5th, 2019.)

This comes from the Western District of Louisiana, the same exact jurisdiction that has oversight of FCI Oakdale! I must ask the Civil Rights Division, "What happened to your commitment?" Did it weaken when the violators of constitutional rights were Department of Justice employees?

IT is contradictions like this which clearly show that there is very integrity or equality at the U.S. Department of Justice.

I continue to advocate zealously for the release of all prisoners housed at FCI Oakdale, but especially the elderly and infirm, those who are most vulnerable to being infected by the coronavirus.

I include here the case citings for the pepper spray case as well as the cites for the FCI Elkton and FCI Oakdale civil actions.

As a proud and dedicated member of the Incarcerated Workers Organizing Committee (IWOC), I am determined to amplify the struggles of all oppressed human beings.

It is important that I remind you that the struggle for prisoner human rights as well as prison abolition will not succeed without your support for us. Share this essay far and wide.

Keith "Malik" Washington is assistant editor of the Bay View, studying and preparing to serve as editor after his release in September 2020. He is also co-founder and chief spokesperson for the End Prison Slavery in Texas Movement, a proud member of the Incarcerated Workers Organizing Committee and an activist in the Fight Toxic Prisons campaign and Liberate the Caged Voices. Visit his website at ComradeMalik.com. Send our brother some love and light: Keith "Malik" Washington, 34481-037, USP Pollock, P.O. Box 2099, Pollock LA 71467. 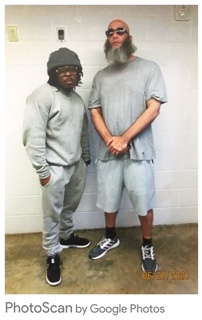