I am writing this to inform you of recent events that have transpired involving Kevin Rashid Johnson.  As many of you already know Rashid was made a target of abusive and retaliatory practices back in May for publicizing the dangerous, inhumane, and unsanitary conditions that prisoners were faced with amid a global health crisis at Pendleton Correctional Facility where he is currently being detained.  These conditions included but were not limited to inadequate food/nutrition, lack of any PPE, lack of cleaning supplies to disinfect their cells in attempts to control the spread of the virus, and COVID-19 positive prisoners being housed among those that were not infected, etc.

After leading a hunger strike with the participation of close to 200 prisoners during its height and penning several articles in response to the negligent and lackadaisical attitude displayed by prison officials, Rashid was immediately targeted for retaliation.  This came in the form of his money being taken but ordered commissary withheld (withholding commissary is illegal unless it is done as a punitive measure after a prisoner has been charged and found guilty of an infraction which was not the case with Rashid) and his cell being ransacked by officers Corcoran and Long, not once but twice, two days in a row immediately following the articles being published.  One of the guards there at Pendleton even went so far as to tell Rashid while he was being held in the extraction cell during the second cell search, that if he would just stop writing about the conditions there at Pendleton then the abuse and retaliation would end.  During the second extraction and cell search, Rashid's tablet was purposefully shattered in order to prevent him from communicating with the outside world.  His next-door neighbor was able to hear the conversation between the guards and heard one say to the other "Here it is" after finding Rashid's tablet after which it was immediately stomped on repeatedly and crushed.

After these failed attempts at coercion, Rashid immediately filed a grievance, as was his right, to protest this illegal action.  Rashid received word just yesterday that the grievance filed in May was denied.  The timing of this decision is worth noting because being that Rashid did not receive a determination for his grievance until just yesterday he was not able to appeal it within the given timeframe paving the way for them to carry out this latest round of retaliatory abuse.

Rashid got word to me this morning, that on Wednesday, July 15, 2020, when he believed that he was being let out of his cell to go and retrieve his commissary, he and his neighbor were both told that they would not be receiving their commissary and that they were going to be held in their cells indefinitely and would not be allowed out for any reason.  They would also not be allowed to use the phones.  This neighbor is the same one that stood with Rashid during the incidents in May even going as far as to speak up to the guards as they were breaking Rashid's tablet.

Word has gotten back from a yard officer by the name of Robert "Bob" Daughtery that this latest action is absolutely retaliation for what happened in May.  He went on further to state that Rashid and his neighbor would be kept in this punitive limbo indefinitely and that they can expect more cell searches looking for bogus contraband.  This is a complete affront to any type of due process and tramples upon Rashid's right to freedom of speech and political expression.  We are asking that everyone who is able, reach out to the staff listed below at Pendleton Correctional Facility and Virginia Department of Corrections as Rashid is only at Pendleton as part of an Interstate Compact Agreement and is still technically in the custody of VDOC.  Please reach out to me as well if you have further questions or concerns by replying to this email as there is only so much that I am able to share here for the sake of time and length.

All Power to the People!

Dare to Struggle, Dare to Win!

Hi, My name is _______ and I am calling to voice concern over the treatment of Kevin Rashid Johnson.  It has come to my attention that Rashid and a neighbor have been refused their commissary, confined to their cells, and are being denied the ability to make phone calls without due process including phone calls to Rashid's attorney*.  I understand further that Rashid has not had a working tablet** with which to communicate through since early May when it was broken in retaliation for speaking out on the conditions there at Pendleton amid the COVID-19 pandemic and that these current actions taken against him and his neighbor are retaliatory in nature.  I want these punitive and coercive actions taken against Rashid and his neighbor to cease immediately and for Rashid's tablet to be replaced and returned to him.  I want you to know that Rashid has my full support and that the world is watching in hopes that you will do the right thing.  Thank you for your time.  Goodbye.

(Proxy for Harold W. Clarke, Director of Dept. of Corrections)

*Rashid has been denied contact with his lawyer, Dustin McDaniel of the Abolitionist Law Center since being at Pendleton.  This is illegal and violates his right to legal counsel

**Per the rules and guidelines at Pendleton regarding the tablet devices that are issued to the prisoners for communication purposes, it is the prisoners' responsibility to replace said tablets if they are lost or broken.  These devices cost around $250 each and we do not believe that Rashid should replace something that was purposefully destroyed by the pig 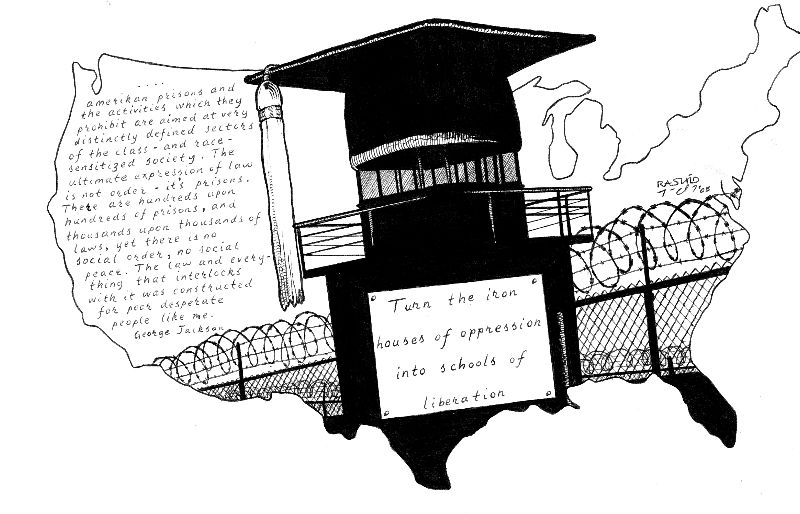