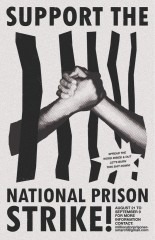 The United States incarcerates the highest number of people in the world, both in absolute and relative terms. But prisoners and abolitionists are challenging the foundations of mass incarceration. Over the past decade, a wave of prison rebellions has swept the country, increasing in both frequency and intensity. In September 2016 the largest coordinated national prisoner strike occurred in facilities around the country. These rebellions prove time and time again that caging and torturing humans is
violence and will be resisted by those locked up by the system. Prisoner resistance demonstrates that instead of solving the crisis of capitalism, prisons themselves are the crisis.

What follows is a press release put out in April 2018 by Jailhouse Lawyers Speak calling for a two-week stretch of protests beginning on August 21 and extending until September 9, the anniversary of both the Attica Prison Rebellion in 1971 and the national strike in 2016. The author of this release, Jailhouse Lawyers Speak, is a national collective of incarcerated people who fight for human rights by providing other incarcerated people with access to legal education, resources, and assistance. The national call to action has now been endorsed by the Incarcerated Workers Organizing Committee (IWOC) as well as various other prisoner-advocacy and abolitionist groups around the country.

IN ORDER TO MAKE PRISONS OBSOLETE , WE HAVE TO SUPPORT THE STRUGGLE OF THE FREEDOM FIGHTERS AND PRISON REBELS BEHIND BARS.

Some places to find updates about the prison strike:

Men and women incarcerated in prisons across the nation declare a nationwide strike in response to the riot in Lee Correctional Institution, a maximum security prison in South Carolina. Seven comrades lost their lives during a senseless uprising that could have been avoided had the prison not been so overcrowded from the greed wrought by mass incarceration, and a lack of respect for human life that is embedded in our nation’s penal ideology. These men and women are demanding humane living conditions, access to rehabilitation, sentencing reform and the end of modern day slavery.

THESE ARE THE NATIONAL DEMANDS OF THE MEN AND WOMEN IN FEDERAL, IMMIGRATION, AND STATE PRISONS:

WE ALL AGREE TO SPREAD THIS STRIKE THROUGHOUT THE PRISONS OF AMERI$$$A! FROM AUGUST 21ST TO SEPTEMBER 9TH, 2018, MEN AND WOMEN IN PRISONS ACROSS THE NATION WILL STRIKE IN THE FOLLOWING MANNER:

We support the call of Free Alabama Movement Campaign to “Redistribute the
Pain” 2018 as Bennu Hannibal Ra – Sun, formerly known as Melvin Ray has laid
out (with the exception of refusing visitation). See these principles described
here: https://redistributethepain.wordpress.com/

HOW YOU CAN HELP

For the Media: Inquiries should be directed to prisonstrikemedia@gmail.com