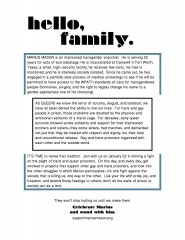 Marius Mason is an imprisoned transgender anarchist. He is serving 22 years for acts of eco-sabotage. He is incarcerated at Carswell in Fort Worth, Texas, a small, high–security facility; he receives few visits, his mail is monitored, and he is intensely socially isolated. Since he came out, he has engaged in a painfully slow process of medical screenings to see if he will be permitted to have access to the WPATH standards of care for transgendered people (hormones, surgery, and the right to legally change his name to a gender-appropriate one of his choosing).

As Queers we know the terror of scrutiny, disgust, and isolation; we have all been denied the ability to live our lives. For trans and gay people in prison, those problems are doubled by the physical and emotional restraints of a literal cage. For decades, early queer activists showed active solidarity and support for their imprisoned brothers and sisters–they wrote letters, had marches, and demanded not just that they be treated with respect and dignity, but their total and unconditional release. Gay and trans prisoners organized with each other and the outside world.

It's time to revive that tradition. Join with us on January 22 in shining a light on the plight of trans and queer prisoners. On this day, and every day, get involved in projects that support other gay and trans prisoners, and look into the other struggles in which Marius participates–it’s one fight against the society that is killing us, one way or the other. Live your life with pride, joy, and freedom, and extend those feelings to others; don’t let the walls of prison or society act as a limit.

They won’t stop hurting us until we make them.

Celebrate Marius and stand with him.