This hunger strike is due to begin July 31, 2019 within the solitary unit at Scotland Correctional Institution in Laurinburg, NC.

Let Day One be a day of inside-outside solidarity! 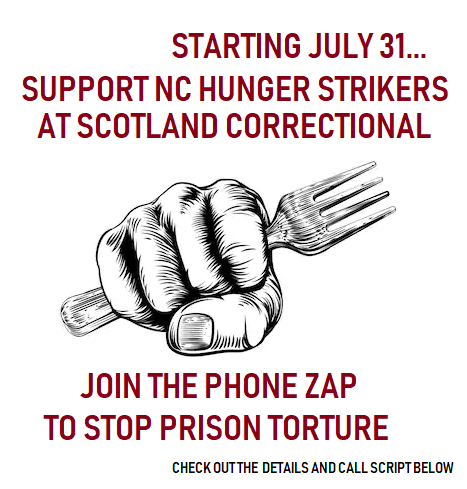 Background
Requests for notaries necessary for legal actions and grievances against conditions at this razor-wire plantation are being consistently ignored. Many of these grievances are against Scotland denying those held captive in solitary confinement of their recreation time. Scotland's staff will simply claim that recreation is "canceled". NCDOC's own Policy and Procedures (Chapter C, Section .1206 (B)) guarantees that those on "restrictive housing" (solitary confinement) shall be allowed to recreation outside of the cell five days a week for one hour a day. Scotland is violating their own policies and causing severe harm to all those  forced to be confined to a small cell 24/7.

Furthermore, Scotland's so-called medical staff conducts what are called “seg checks” at 1am-2am every night when everyone is asleep. This seg check involves banging on everyone's window disrupting their sleep and startling them. Sleep deprivation is widely recognized as a method of torture.

Record calls if possible. Leave long messages on voicemails. Call multiple times and disrupt their operations. Remember that denial and obstruction are standard operating procedures for them.

Report any and all info received to atlantaiwoc@protonmail.com

"Hi my name is ________, The world is watching and is in support of the hunger strikers there at Scotland Correctional Institution. We are well aware of your violations in denying them a legal notary and throwing out their grievances. Multiple grievances have been made against your "cancellations" of recreation in spite of your Policy and Procedures manual stating that those on restrictive housing shall be allowed to rec outside of the cell for five days out of the week for one hour a day. Many humanitarian organizations have been informed on Scotland Correctional Institution's violations that directly torture those you confine to a cell 24/7.

We have also been informed that Scotland's so-called medical staff has been conducting "seg checks" at unreasonable hours of the night, 1am-2am every night when everyone is clearly asleep. These seg checks involve medical staff banging on everyone's door, disrupting their sleep and causing further psychological harm.

These methods of torture will be widely exposed and we not quit until they have ceased."

*"Inmates assigned to Administrative Segregation, and Disciplinary Segregation, Intensive Control, Maximum Control, High Security Maximum Control, Protective Control, shall be allowed one hour per day, five days per week exercise outside the cell, unless safety or security considerations dictate otherwise. Medical authorities may grant exceptions to the five times per week exercise requirement for specific reasons. The exercising of an inmate or the inmate’s refusal to exercise shall be documented on form DC-141."  (https://www.doc.state.nc.us/DOP/policy_procedure_manual/C1200.pdf)