Call the Alameda County Board of Supervisors on Thursday, November 7th  and demand that they put an end to the sheriff’s retaliation and meet prisoner demands.

On October 31, prisoners at Santa Rita Jail in Dublin, CA kicked off a hunger strike and work stoppage that spread to all kitchen workers and, at its peak, included at least 300 active participants. A prisoner died on Saturday, October 26th after calls for help were ignored by guards. The strike was called in response to this death as well as the deplorable conditions inside.

Breaking its own public promises, Santa Rita administration is now retaliating against the strikers. They have denied visitation, including legal visits, and added 30 days to twelve strikers’ stay for “threatening” jail operations. Other prisoners were forced to work for no pay in the kitchen.

Santa Rita – one of the largest jails in the country – is notorious for filthy conditions, medical neglect, punitive mental health “care”, and guards that range from indifferent to sadistic. Multiple lawsuits are active against the facility and its personnel for wrongful deaths, reproductive harm, guard orchestrated assaults, and other forms of systematic abuse and neglect. Nine people in custody have died this year alone.

Demands of the strike include:

The current system does not make our communities any safer! To the contrary, it makes them less secure! We need to build people up, make them productive and restore their health and vitality.”  – Strike Statement, Oct. 29, 2019

Call the Board of Supervisors and let them know we support the strikers inside Santa Rita!

“Hello – I am calling in support of the people who had been on hunger and work strikes inside Santa Rita Jail. The board of supervisors must ensure that the sheriff end retaliation against the strikers by reversing extended sentences, ending forced labor and strike breaking, and restoring access to legal counsel. The board of supervisors should also see that prisoners' demands are addressed. That means an end to price gouging, assured sanitary conditions, reducing the use of lockdown, and restoration of visits and calls with their families and attorneys. What is your office doing to make the sheriff accountable? Retaliation against this peaceful protest is absolutely unacceptable."

You don’t have to give your name or any other information if you don’t want to.

Entering *67 before any number may block your caller ID.

Don’t worry about anyone giving you the runaround, not getting through or having to leave a message. Just pursue it to the point that you can. We are calling to apply pressure and every call counts.

Please report back on calls made in the comment section below. 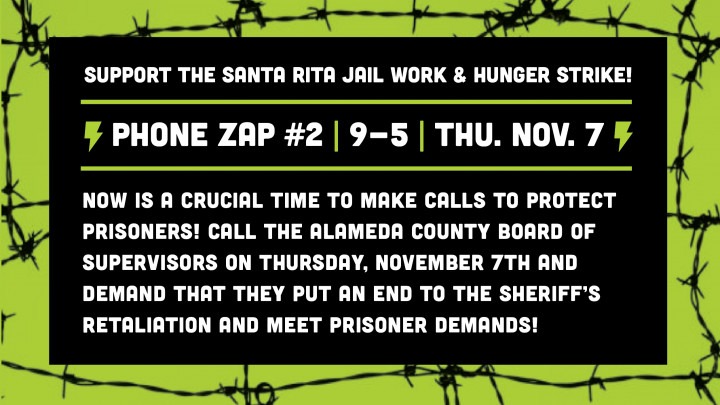 November 6, 2019 2:46am
Pierre (not verified)
Posted to www.facebook.com/anarchylovers and www.instagram.com/anarchyluv
November 7, 2019 10:30am
P (not verified)
I called the first district #. I got their office. I asked the person who picked up about information about what they were doing to restore sanitary conditions for the strikers. She offered to forward me to a Policy Supervisor, but wanted to know what city I was living in. I told her that I do not need to give that information. She said that she wanted that information so that she could forward me to the right PS because they all represent different districts. I told her to send me to any one of them because my comments would be relevant for all. She insisted to know what city I lived in so I told her I'd call back if I needed more info.
November 7, 2019 2:35pm
Pierre Maio (not verified)
A meeting to discuss a petiition was mentioned to be happening next Thursday at 10 am. I spoke with one "Dean" supervisor of the jail who denied knowledge of inmates being denied access to legal resources or attorneys. Scott Haggerty's office said they were logging all calls and emails and they received many today. Nathan Miley's assistant, Austin, seemed supportive and mentioned that nobody had called about inmates not being allowed access to attorneys and the legal library, so definitely mention these objectively constitutional demands. Power to you all. The number for the Sheriff's office which staffs the county jail is 5102726866, the number for the jail is 9255516500 or for faster response 9255516580
November 7, 2019 7:38pm
Courtney (not verified)
November 7, 2019 1:30 PM 1. Spoke with Brianna at the 5th District Supervisor Keith Carson's office and was advised he was unavailable but she took a message. 2. Spoke with Gabriella at the 2nd District Supervisor & President Richard Valle's office and was advised "We're aware of all of these requests and are working on it" and that Richard Valle was unavailable. 3. Spoke with Denise at the 1st District Supervisor Scott Haggerty's office and was advised that they have "received many calls in support" of these issues. When asked what city I live in I advised of my city and state and also advised that human rights advocates from all over the country are aware of the unacceptable living conditions and treatment of the Santa Rita strikers. Denise responded by stating that they are "receiving calls of support from all over the nation" and that they will "review all of these calls and messages at the end of the day." 4. Spoke with Heather at the 3rd District Supervisor Wilma Chan's office an was advised that she was unavailable and that they will relay the message at the end of the day. She advised that they have received many calls about this. She asked that I call back at the end of the day if I would like to speak to Wilma, however I was unable to follow up due to time constraints/work. 5. No response from the 4th District Supervisor Nathan Miley's office, there was a directory that didn't seem to direct me to a live person.