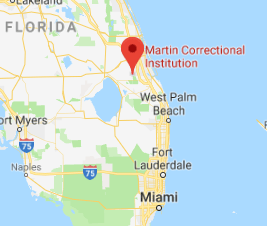 Florida prisons are notorious for abuse, toxic conditions and other human rights abuses. People imprisoned within Martin Correctional Institution are being subjected to filth, mold, infestations, starvation, and retaliation when they attempt to bring attention to the conditions of their confinement. Within hours of asking for help comrades inside are snatched by police, put in confinement, and threatened with further abuse.
Background: Last year during the 2018 National Prisoner Strike that took place from August 21st to September 9th, prisoners at Martin CI participated in the general strike and commissary boycott in order to force prison administration to hear their demands.  Martin CI was also the target of outside protests last year in response to the horrific conditions inside (link below).
https://www.jacksonville.com/news/20180622/fathers-day-protests-draw-swift-responses-at-two-florida-prisons

1. Kitchen is infested with rats and roaches, all running through the dining hall during feeding.

2. Constant and intentional deviation from master menu and state standards. Food Service Director Mitchell serves whatever he pleases with impunity.

4. Moldy trays, greasy sporks and cups. All trays, cups,and sporks are being washed in filthy garbage cans, rather than by dishwasher and without legally required water temperature and detergent.

7. Food Service Director Mitchell is threatening to take prisoners off their religious or dietary meals or even put them in solitary confinement if they file grievances regarding master menu deviation.

8. Food Service Director, Mitchell is throwing prisoner grievances regarding food service in the trash. He even laughs at prisoners, boldly stating,"Keep writing grievances! I'm a potato you niggers' ass to death." (meaning no nutrition but potatoes).

We need your help on the outside to bring pressure and shine a light on these violations!
Please make these calls and write these emails!

SAMPLE SCRIPT:
"I'm calling about the horrific violations that are occuring in food service at Martin Correctional Institution such as spoiled food being served, unsanitary conditions, abuses of authority and rampant vermin infestations. I demand these complaints be addressed and any prisoners who have been retaliated against for exposing these human rights violations be released from confinement immediately and have their visitation rights restored. Thank you"

Don't be worried if anyone is rude or if they argue or deny anything is going on. That is what they always do! Just you calling or emailing delivers the message that we are watching and we know the situation.

If you have any feedback to report, you can comment below right here on this page. We will be offering updates and relaying feedback as we get it. Thanks!

Updates
Update from Gainesville IWOC! "We are adding a new target to this campaign. The following number is for the Martin County Department of Health office. This is a state agency capable of conducting inspections in order to address public health and safety concerns. (772) 221-4000 Dial 6 at the menu to speak with the environmental health inspector. Hopefully this can result in some much needed oversight at the Martin CI prison."