A continuously updated timeline of Operation PUSH, a Florida prison strike that started on MLK Day.

This is a continuously updated article on the events taking place under Operation Push. To learn more about Operation PUSH and how you can support it, visit the campaign page. For breaking news follow IWOC and Fight Toxic Prisons on Twitter and Supporting Prisoners And Real Change (SPARC) on Facebook.

Florida prisoners held in a 'Closed Management' unit join Operation Push by boycotting commissary. These prisoners are locked up 23 hours a day, are not allowed any movement around the camp or work assignments and are subject to constant communication restrictions. Prisoners who speak out about conditions in FL prisons are sent here so that the FDOC can keep them quiet and maintain the lie that their prisons are functioning well, their slaves are happy, and there is not a resistance movement building inside.

Rashid Johnson shares details on his torture in retaliation for his piece, Florida Prisoners Are Laying it Down.

Phone zap for Rashid is a success! He is able to meet with his lawyer and is confirmed to be in better health. Phone zap is carried out in defense of Rashid Johnson, facing bogus charges of "inciting a riot" for publishing an exposé on conditions inside Florida prisons and being denied medical treatment after being tortured. 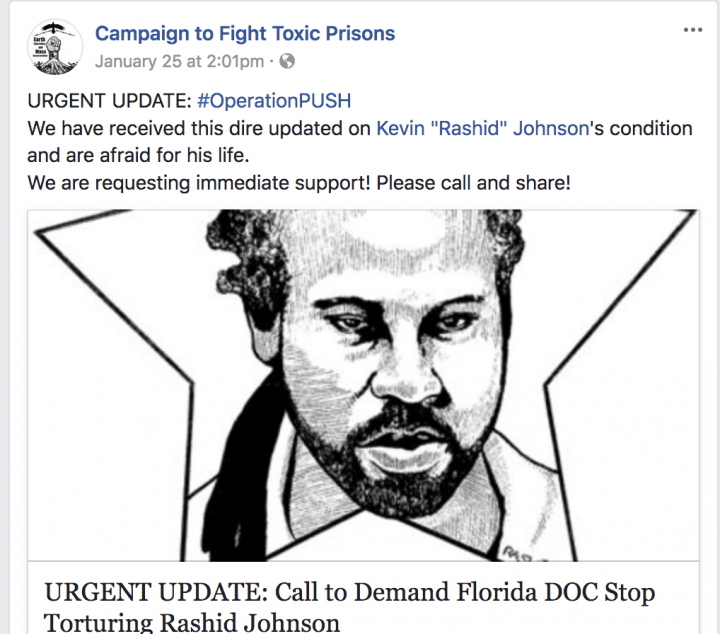 Gainesville IWOC and Fight Toxic Prisons receive a letter from Rashid Johnson reporting being tortured in retaliation for his exposè of the Florida prison system. 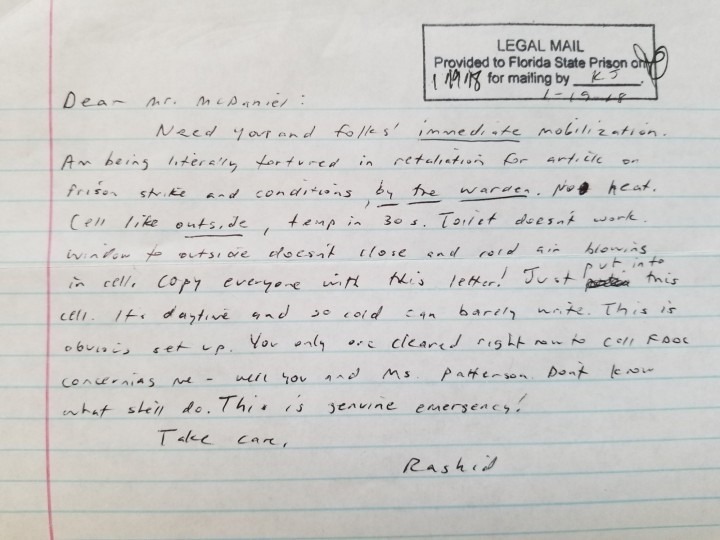 A "phone zap" takes place, tieing up Florida Department of Corrections phone lines throughout the day. An overwhelming amount of people call in, making it clear to the prison system that we are watching and we support striking incarcerated workers.

Gainesville IWOC and Fight Toxic Prisons publish an update on the campaign and reflection on resistance thus far.

The number of contacts locked up, for as much as 2 weeks prior to MLK Day to try to prevent a strike grows to dozens. The full extent of round ups is still unknown. Some haven't been charged at all, others have vague "disrespect" accusations.

A nationwide phone zap is taking place Monday to put the Florida DOC on alert and demonstrate the support #OperationPUSH has.

Confirmation begins to trickle in of pre-emptive sweeps of organizers and lockdown of facilities.

Meanwhile, solidarity actions grow on the outside, including a protest at Norfolk City Jail in Virginia  , and a call for support from Angela Davis. Media coverage highlighting the infamous conditions in Florida prisons and the campaign grows as well: Liberation News, WTXL, Brinkwire. 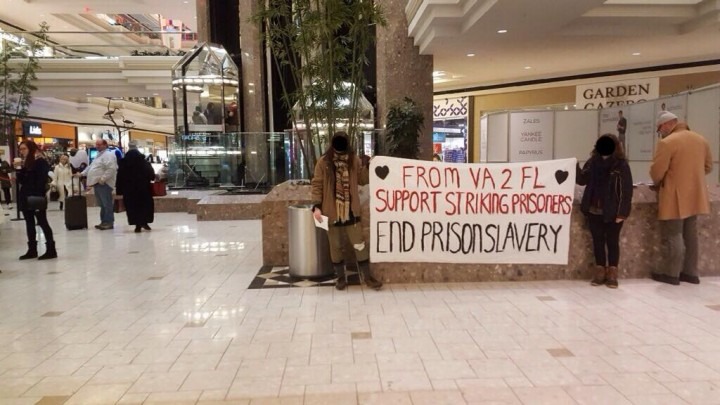 Communication still silent from inside, most likely from sweeps and placing participants in confinement.

On the outside, demonstrators move into the Florida Department of Corrections office calling on officials to meet prisoners' demands.

One demonstrator is arrested and an emergency rally is held demanding her release. She is released that same night to cheering supporters. 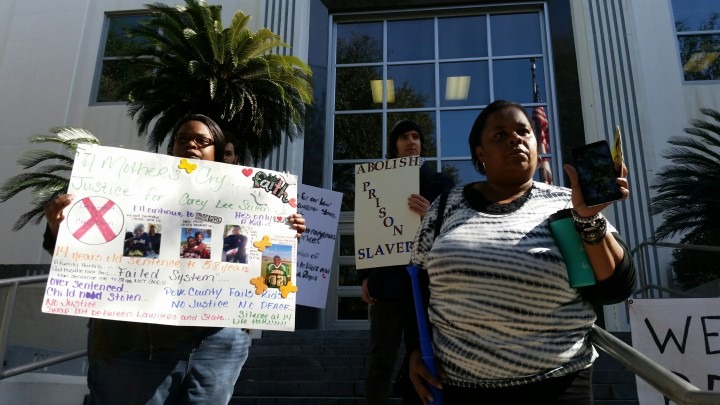 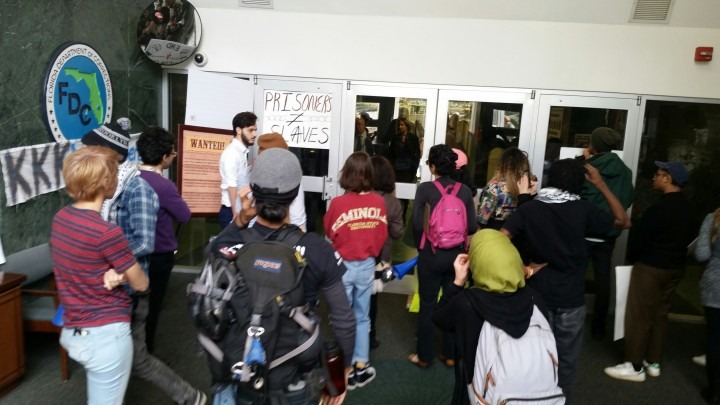 Work stoppage begins! Communication from the inside comes to a halt. Meanwhile, solidarity rallies are held at three Florida facilities, over 200 yard signs go up around Florida and multiple banner drops take place. See It's Going Down's #OperationPUSH Round Up for photos and more. 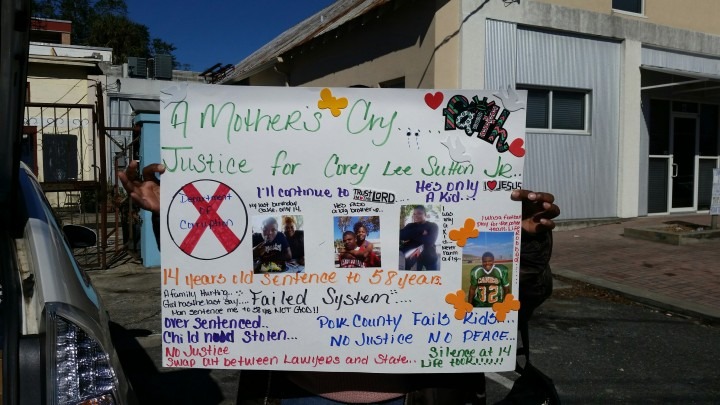 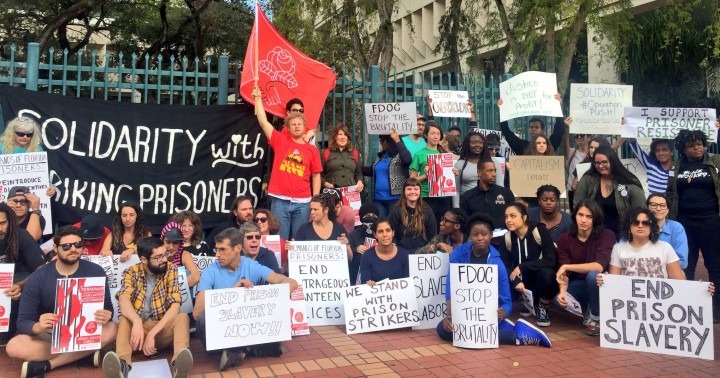 Florida Department of Corrections announces to families that visitation hours are cancelled on MLK Day for Everglades Correctional Institution and Lake Butler Reception and Medical Center.

Dozens of suspected participants and organizers are put in solitary confinement.

Over 70 organizations sign on in support of Operation PUSH.

Florida New Afrikan Black Panther leader and incarcerated organizer in Florida, publishes Florida Prisoners are Laying it Down a public endorsement and personal account of the Florida Prison System.

Media coverage picks up with articles from It's Going Down, In These Times, Shadowproof, Miami New Times, and the Miami Herald.

Florida incarcerated workers announce Operation PUSH, a month-long work stoppage and refusal to purchase from commissary in order to halt abuses and exploitation within the prison system.