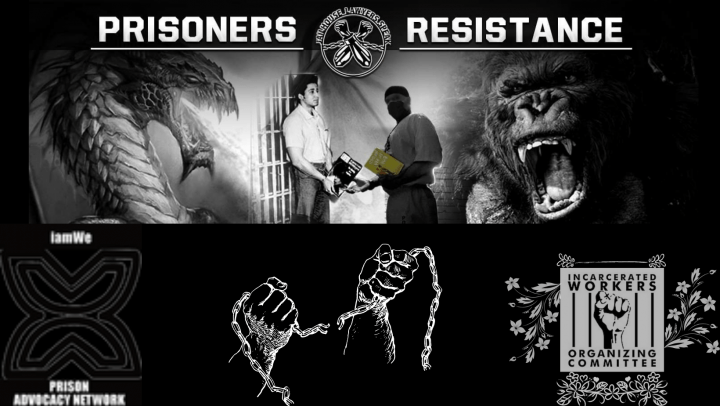 It is with a collective heavy heart, but a raging spirit of Abolition that Jailhouse Lawyers Speak announces the call for National Abolition Demonstrations inside the prisons and Jails of America! Jailhouse Lawyers Speak members around the nation are making a direct appeal for people locked up to disrupt the normal prison operations of america.These demonstrations will be known as National Shutem Down Demonstrations. Scheduled to take place August 21 - September 9th 2022. This announcement comes early to give our friends, families, comrades and supporters on the outside enough time to get the word inside to every jail, prison, and ICE facility by any means.

People have asked why we fight to end legalized enslavement and to abolish prisons in America?

We fight to end legalized enslavement because it's wrong, promotes prisons, demands profits off the convicted, and it violates human rights.

Ending legalized enslavement will open cell doors, but like other countries with no slave laws on the books, Amerika will adjust when it amends the 13th Amendment to the US Constitution. The same way it did in maintaining White Supremacy through infrastructure racism. We too must adjust in tactics and strategies. Never forget that American prisons, jails and the police are the legacy of slavery.

Part of JLS adjusting is moving harder against the system core fascist tool: prisons and jails. We must shut them down. And for those that desire to see America do better, the fight must be to divert those funds back into disadvantaged communities. Poor communities are where over the majority of US prisoners come from. We would argue that we (people in prisons) are products of our environment.

As one human rights organization in the historical Prisoners Resistance Movement, we understand that everything has its season. The leaves are turning, freedom cries are in the air. Abolition must meet and seize the times.

People in prisons, jails, or ICE can select one or multiple ways to participate in the Shut 'Em Down demonstrations

1. Work Strikes: Prisoners will not report to assigned jobs. Each place of detention will determine how long its strike will last. Some of these strikes may translate into a local list of demands designed to improve conditions and reduce harm within the prison.

2. Sit-ins : In certain prisons, men and women will engage in sit – in protests.

3. Boycotts: All spending should be halted throughout demonstration dates. We ask those outside the walls not to make financial judgments for those inside. Men and women on the inside will inform you if they are participating in this boycott.

4. Hunger Strikes: Men and women shall refuse to eat. This is usually the only options some may have in order to participate

5. Sabotaging prison work equipment to ensure it will not function

Jailhouse Lawyers Speak placed an inside demonstration call in 2018 on the behalf of prisoners nationwide. With that strike call came a list of 10 demands. Today 2021 we are still calling on people on the inside and outside around the nation to lift back up those human rights demands (as amended). These are demands that thousands of people in prison around the nation agreed with by demonstrating and suffering horrible retaliation over. We will not abandon them. Those demands are steps in the right direction to dismantle the prison industrial slave complex.

Based on the 2018 national prisoners strike 10 demands and the overall scope of the 10 demands we are demanding:

1. The end to prison slavery. The 13th Amendment punishment clause to the US Constitution be repealed. (Popular language "amended").

Sen. Jeff Merkley of Oregon and Rep. William Lacy Clay of Missouri introduced a joint resolution that would remove the 13th Amendment's "punishment clause," or language that excepted convicted prisoners from the ban on slavery and involuntary servitude. Jailhouse Lawyers Speak agrees with this historical move to end legalized enslavement of the people in the US

2. The closure of a majority of jails and prisons in every state. This includes federal prisons and ICE. (Outside organizers and/or people currently inside should select and educate the public as to why certain confinement hell holes must be shut down)

Closures should be followed by laws being enacted to reduce the use of cells. And force resources that would have been allocated to those jails and prisons into the poorer communities to aid in ending poverty crimes

3. Immediately closing down all private prisons

4. Freeing All Political Prisoners in the US prisons

WHAT CAN YOU DO ON THE OUTSIDE TO HELP

Create promotional materials to send inside, share on social media, and to pass out at events

Promote the Shut'em Down Abolition demands

Organize event to educate and demand the closure of prisons, jails, and ICE

*Consider applying for the following Committee/seats:

This Committee will be responsible for organizing the Convention.

Volunteer lawyers and law students only.

Will be responsible for Political Prisoners campaigns.

At least one volunteer lobbyist will be needed for every state.

People inside that would like to share their ideas on places that should be closed down or notice that their place of confinement will be participating can write to:

Campaign Scope
National
Organizers
Jailhouse Lawyers Speak
Demands
1. The end to prison slavery. The 13th Amendment punishment clause to the US Constitution be repealed. (Popular language "amended").
2. The closure of a majority of jails and prisons in every state.
3. Immediately closing down all private prisons
4. Freeing All Political Prisoners in the US prisons